September 30, 2017
Sometimes it's the quiet moments of courage that impress us the most.

March 18, 1869
"Last week Wild Bill was stopping at the Passenger House and was visited by many of our citizens. He was the center of attraction."
—Mendota, Illinois Bulletin

By the first week of April, James Butler Hickok had arrived at his hometown of Troy Grove and found his mother standing at her garden gate with tears streaming down her cheeks. When she last saw her fair-haired, youngest boy, he was just a raw-boned kid, but now, 14 years later, he stood before her as one of the most famous men on the frontier. He was almost 32-years-old. He walked with a limp from a lance wound from an In-din fight with Cheyenne warriors, in February, and he sought out a Dr. Thomas of Mendota. His sister Lydia recalled the visit in 1896:

"The doctor came one evening to perform the operation, but Bill would not take chloroform. The doctor made four cuts outward from the wound, making a cross with the lance. Then he drew the flesh back and began to scrape the bone. I was holding the lamp and began to feel myself growing faint. 'Here, give it to me,' said Bill. He took the lamp and held it while the doctor scraped away, never flinching once during the operation." 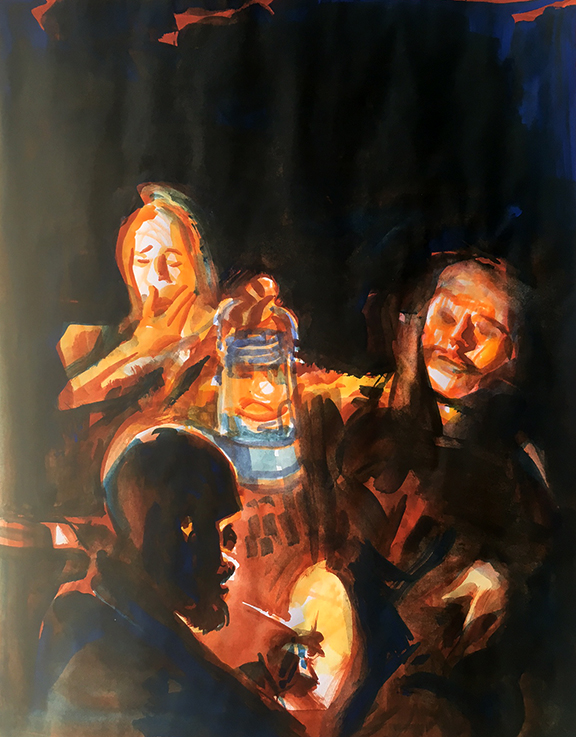 Daily Whip Out: Study for "The Bone Scraping Incident"

"Wild Bill had his faults, grievous ones, perhaps, but he never was the human fiend some writers have pictured him."