Was Hickok A Hopeless Drunk at The End?

September 24, 2017
I have some crazy friends and I have some astute friends. Sometimes they inhabit the same body. Here's my fellow outlaw loving artist pard (we call ourselves "The Bang Gang") on the tragedy of Wild Bill: 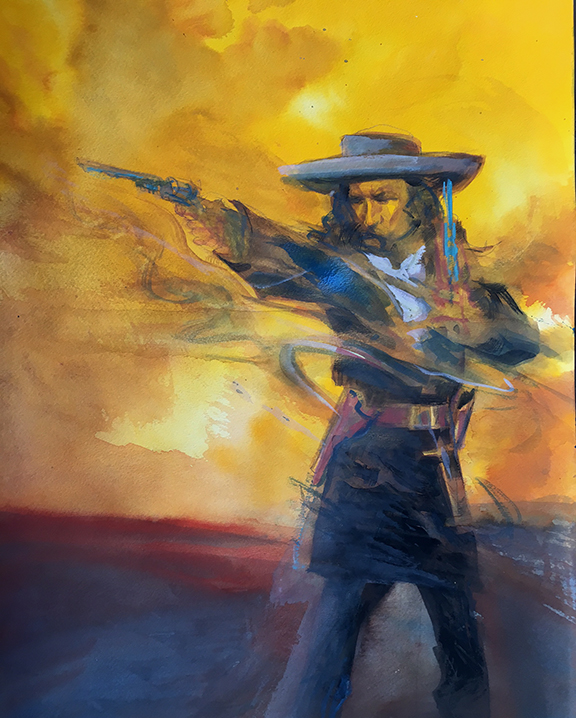 Daily Whip Out: "Hickok In His Prime"


"There is a great sense of tragedy in Hickok's story. The classic gunfighter who starts going blind. The last man he kills is a dear friend of his and he never shoots at anyone again. He parades himself on stage until the sham is more than he can take. He returns West where the proverbial "last bullet" is waiting for him. Sitting with his back to an open room he is dealt a mythic hand in his last game of poker. A single shot from a revolver kills him and when the assassin turns the gun on others in the room the gun fails to fire; as if firing that one last bullet was the gun's entire purpose. The assassin meets a just, and horrible, end. Like a true mystic, Hickok enjoys his resurrection thru art work, films, poems, and biographies. The perfect mythical man."
—Thom Ross 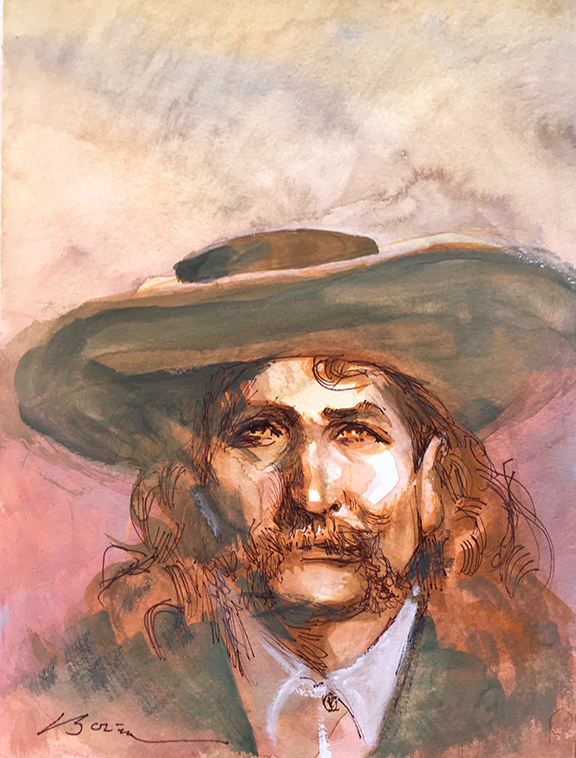 
Was Hickok A Hopeless Drunk at The End?
Sometimes when we are digging deep for facts and clues, we stumble upon a string of disparate anecdotes that, when strung together, point in a direction we didn't see coming. Like Thom Ross, I love Wild Bill, but as I piece together Hickok's last months I have been forced to look at some troubling patterns. If you look at these incidents with a sober eye, it begs the question—Are me and my outlaw worshipping friends just scared little boys genuflecting at the trough of a drunken thug?

As my late Aunt Jean might say, "Boy, Howdy."

Wild Bill liked to drink and carouse. That is a known fact.

So, when we read about Wild Bill acting out in "The Scouts of The Plains" it can either be taken as someone who hates the fakery of show biz, or, he hates what he has become after the tragedy of shooting and killing his friend, and he is coping by drinking too much before, during and after the show. One has integrity, the other version is rather pathetic.

After Hickok leaves Cody and the Combination crew, he goes to New York, and there are numerous accounts of him drinking too much and gambling away his parting money (Cody and Omohundro presented Wild Bill with two pistols and $500 each, or $1,000, when he left the show). We want to think that Hickok left the show on his own terms, but did his partners kick Hickok out of the Combination because he was drinking too much and causing them too many problems? That is, in fact, one of the stories that floated around after Wild Bill left.

When Hickok returned to the West it didn't get much better. He was accused of being "a worthless loafer and bummer" in Cheyenne, and the city marshal ordered him out of town "by virtue of the provisoin of the vagrant act." He essentially was spending his days in the Gold Room bar, bragging and drinking all day. When he married Agnes Lake, the minister wrote in the registry that he didn't think they "meant it." Would that be because Wild Bill was in the bag during the ceremony? When Hickok goes to Deadwood, ostensibly to stake a claim for he and his wife, he spends most of his time in saloons drinking and gambling, and that's where he gets the fateful bullet in the back of the head.

After Hickok's death we get this:

"Years ago, before wine and women had ruined his constitution and impaired his facilities, he was more worthy of the fame which he attained on the border."—Cheyenne Daily Leader, August 16, 1876

The Illegal Town
By the way, the incomparable Joseph Rosa described the haphazard building of Deadwood proper as "one main street which weaved like a moving rattlesnake in and out among the tree stumps and potholes left by the early arrivals."

It's one thing to be going blind and go out on your own terms (our popular conception of Wild Bill) and it's another to turn into a drunken joke. Perhaps both are true. Still, the words of another astute friend of mine, rings more true than the facts on the ground: