Mama Take This Badge Off of Me

September 1, 2017
Working on the book and discovering little gems of insight.

Was Hickok Going Blind?
By 1876, the legendary Wild Bill was in the dumps. His lawing days were over since he shot and killed his friend and deputy, Mike Williams, by mistake. That was in 1871. He hated the fakery of show business, that was in 1874, and now, in Cheyenne he was arrested for vagrancy. To make matters worse, the rough and ready West of his youth was fading right before his eyes, and, by this time even his eyes were not doing that well. Some sources claim Wild Bill traveled from Cheyenne to Kansas City to undergo eye treatment from Dr. Joshua Thorne. One report claims Hickok had "opthalmia" which is a condition induced by exposure to toxic chemicals in the Black Hills. Another report claims Hickok was suffering from glaucoma. According to Joseph Rosa, the go to guy on all things Hickok, most modern day experts concur that Bill most likely was suffering from trachoma.

No matter which eye ailment Hickok had, it could not have been comforting, especially for an aging gunfighter who depended on his eyesight to shoot straight. An eyewitness who saw him in Cheyenne reported that "he is a trifle pale now, because of a recent illness."

In perhaps his last photograph, taken on March 5, 1876, and just prior to his marriage to Agnes Lake Thatcher, Bill looks a little pained. 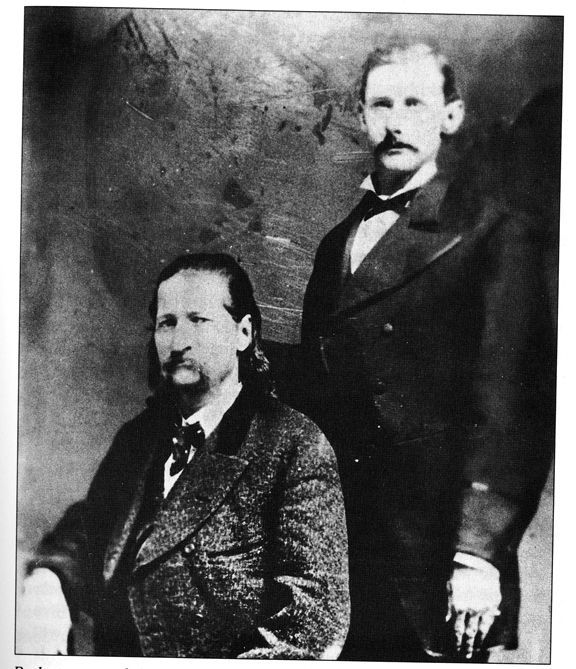 Wild Bill with S.L. Moyer, one of the witnesses to Hickok's wedding

A receding hairline and a pasty, pained expression captures a man clearly on the downhill slope. The next stop was Deadwood. He had five months to live.