One Actor Shows Up In Three of Our Most Authentic Westerns

November 15, 2017
Since we are doing authenticity in Westerns I have been rounding up all the contenders—looks like we'll have approximately two dozen films that have a major aspect of historic authenticity—and I was rather surprised that one actor appears in several of our nominated films.

This young actor tells how he got his iconic part in "McCabe & Mrs. Miller," by showing up at the Lionsgate offices in Westwood and knocking on the door, and going inside to see Robert Altman standing there in his bathrobe (it was doubling as his apartment). The actor says, "He looked at me and he said, 'So we’re going to do this movie.' I said, “Yeah.” He said, “Did you read it?” I said, “Yeah.” “So you saw the part?” “Yeah.” “You want to play it?” “Yeah!” That was my audition! [Laughs.] But that’s Bob. That’s what he did. I mean, he perceived an essence pretty quickly, and he realized right off that the kid standing there inside his door had the right kind of innocence that would serve the role in the film. Because, you know, this is a kid who comes to town and gets shot, really, in cold blood. And it’s the dénouement of the film, and it was his way of really showing the savage, random violence that existed and was so much a part of life in that time and place."

And, of course this same actor played Jim Younger in "The Long Riders" along with his brothers. He had this to say about acting in a movie with your brothers: "You know, when you step up and play a scene with your brothers, you can’t get away with anything. [Laughs.] They’ve known you forever! So all of that gets stripped away, and if there’s even a hint of B.S., you’re gonna get called on it. So it was a great experience in that way, and I think that the film still resonates, because there’s just something that you can’t fake about those kinds of relationships. When you see James and Stacy Keach on the screen together, they’re brothers! You see me and David and Robert, we’re brothers! You see Christopher and Nicholas Guest, or Randy and Dennis Quaid… I mean, there’s a wonderful texture to that, one that’s really unique, and I don’t think it’s been done quite as well since."

This actor also played Buffalo Bill Cody, but perhaps his best role is of the first gunfighter: 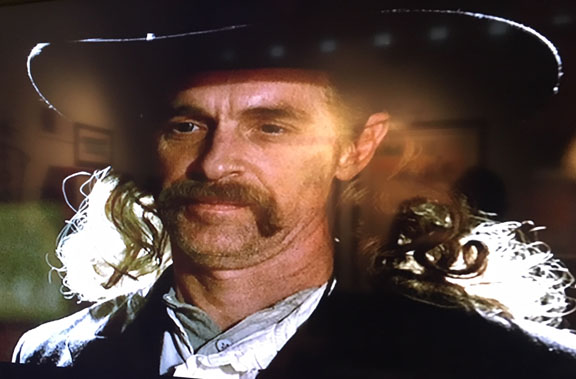 As for his role as Wild Bill, Keith says, "What a role to have the chance to play, but especially as written by [David] Milch. It was extraordinary stuff. He wrote this kind of American Shakespeare. But I played my part for four episodes, and the rest is history!"

Here's the full interview with Keith

Keith has spent much of this month serving as the host of TCM’s month-long programming special Shane Plus A Hundred More Great Westerns, which continues through July 27. Check it out. A real, iconic Western stand up guy.

"I did the pilot episode [of Kung Fu] where I played [my brother David] at age 17. I was, in one sequence, as his character, and they obviously used that footage over and over again throughout the course of the series. [Laughs.] I would get residual checks for $30 all the way down to maybe $1.75 at one point."
—Keith Carradine