The Tale of Two Sets: Tombstone vs. Wyatt Earp

November 21, 2017
I think it's possible I am the only person on the planet who had the privilege of visiting the movie set of Tombstone, in June of 1993, and then the competing Wyatt Earp set, the day after Thanksgiving of the same year.

This happened because of my therapist (long story). I arrived at  Cook's Ranch-movie set outside Santa Fe, New Mexico as the guest of the production manger. He had purchased more than 70 copies of my recently published book, "The Illustrated Life & Times of Wyatt Earp" as gifts for his carpenters and crew, who had carefully built Dodge City, which had been grafted onto the existing set, complete with stockyards and shipping pens, at a cost of $2.5 Million. When I saw the ambitious sprawl for the first time, I gasped, "Holy Guacamole, you could rebuild my hometown of Kingman on Bell Road in Phoenix for $2.5 million!"

When I asked what they were going to do for the Tombstone scenes, he said dryly, "Oh, we just moved over a street." And here is that street, doubling as Fremont Street: 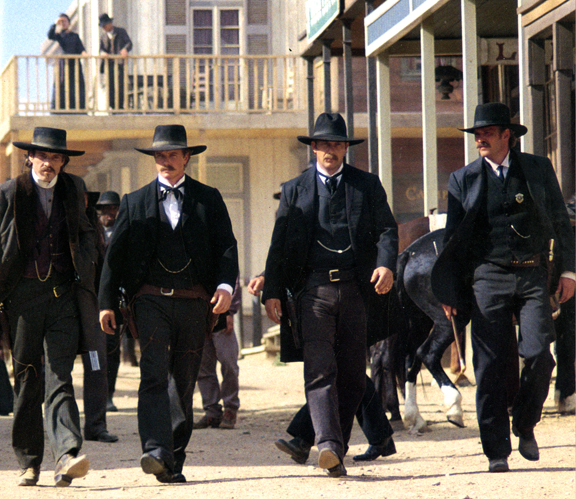 The Walkdown. What's especially accurate about this scene
is the couple on the balcony looking on with curiosity. In most movie portrayals of the fight, the townspeople are oblivious to what is coming, but in the real Tombstone, the entire town was a buzz with the rumors of a fight between the cow-boys and the Earps.


It was very cold on the set that day with a biting wind. Costner showed up around 2:30 and they filmed a cattle scene in a tiny corral. It's a transition scene and barely shows in the movie and I stood there freezing to death and watched them redo it a dozen times and I couldn't tell you what it was about. 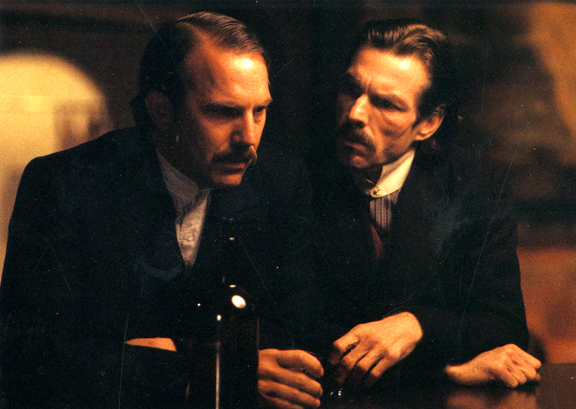 Costner was fresh off his box office juggernaut Dances With Wolves and could do just about anything he wanted. He told Warner Brothers he wanted to do a six-part TV series—a la Lonesome Dove—on the life of Wyatt Earp and the studio paid Dan Gordon to write six-hours worth of script. In the meantime Costner got wind of the competing Kevin Jarre project, Tombstone (in fact it was offered to Kevin and he read the script), so Costner quickly shifted gears and told the studio he now wanted to convert the six-hour miniseries into a major motion picture and the race was on. Costner had the ponies (a reported $55 million budget against $20 million for the Jarre project). 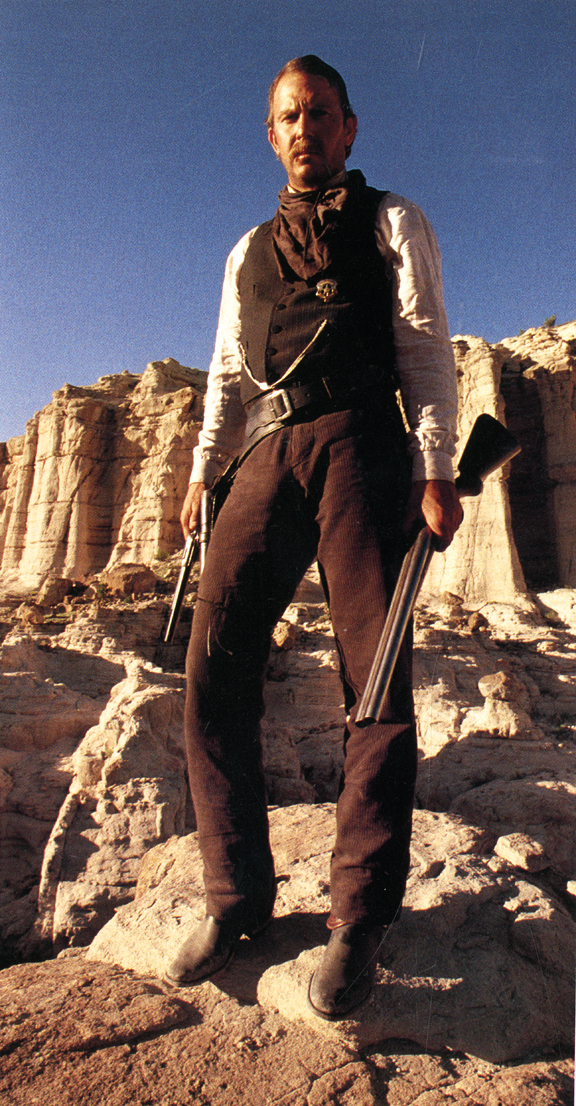 Costner physically made a good Wyatt Earp although,
I think he chose the wrong hat.

Wyatt Earp (1994) was literally upstaged by Tombstone which came out six months earlier, (I saw the premiere in Tempe on December 20, 1993) and even though it had great promotion, Wyatt Earp was too late in the cycle and got beat up over the comparisons. However, the relationship with Earp and Doc Holliday (Dennis Quaid) is still pretty strong and authentic. 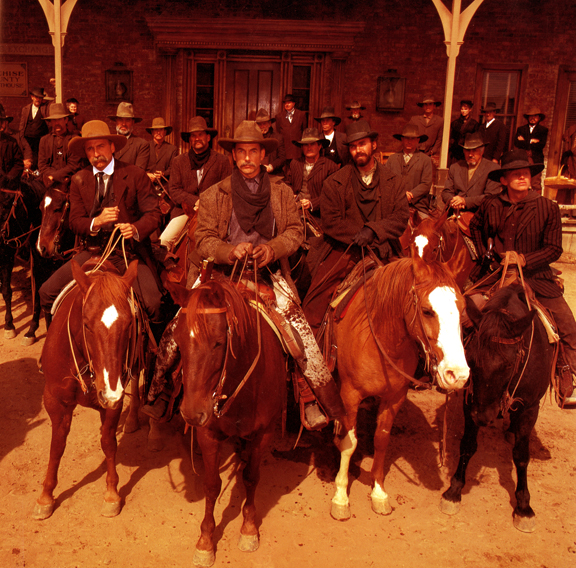 John Behan (Mark Harmon) and his posse. The rumor on the set was that Costner had been upstaged by Alan Rickman in "Robin Hood: Prince of Thieves" (1991) and he, or the director Lawrence Kasdan, insisted that the outlaws in Wyatt Earp wear drab browns, like in old B-Westerns where care was taken not to outshine Hoppy's outfit.

I think this is the key difference between the two movies. In Tombstone the cowboys, and Curly Bill in particular, are dressed flamboyantly like land-locked pirates and the end result is wilder and more fun. Costner's version is much more laced up and tamer. And perhaps that is the key to any good movie. There needs to be a little wildness, something unexpected, and in Tombstone the costuming and the Buckaroos gave the movie an edge Wyatt Earp didn't have.

Once, when I was watching TV and landed on Tombstone while channel surfing, Kathy walked by and stopped. I turned to look at her and she said, almost mesmerized: "Oh, this is different." This is a woman who can't stand most Westerns and what I think she meant by this is, Tombstone looks different from most Westerns where the outlaws wear brown pants and try not to upstage the star.

Long Story Short
When I turned forty I hit the wall as an artist. I had never believed in writer's block but now I had it, bad. Finally, Kathy, who is a therapist said, "You need to go see someone." She found me a therapist who specializes in artists who hit the wall at forty. I'm not kidding. He wrote his graduate thesis on the subject and regaled me with all the artists who have hit the wall at the age of forty and then flamed out. His told me that when we sensitive types turn forty, we can see the finish line and none of us are where we thought we'd be. We also can see all the people who are ahead of us, some of them taking victory laps and having fun, while we are way back at the third turn trudging along. So, we either drown ourselves in drugs and booze, or we suck it up and charge on with a new effort. Anyway, thanks to William Heywood, I finished my Wyatt Earp book and dedicated it to him. The book premiered at Suzanne Brown's Art Gallery in Scottsdale in October of 1993, and a couple weeks later he took the book, and went on a vacation to Santa Fe where he and his girlfriend rented a casita near the Plaza. His next door neighbor introduced himself and said he was in the film industry. Turns out he was the production manager for a movie being filmed there called Wyatt Earp.

"Pay attention. The Universe is trying to help you!"
—Old Vaquero Saying