The Red Sash Gang On The Set of "Tombstone"

November 16, 2017
In June of 1993 I was fortunate enough to visit the movie set of "Tombstone" filming near Elgin, Arizona. It's near the site of other Westerns like "Red River," and Elgin is near Sonoita, which is about an hour west of the actual town of Tombstone. 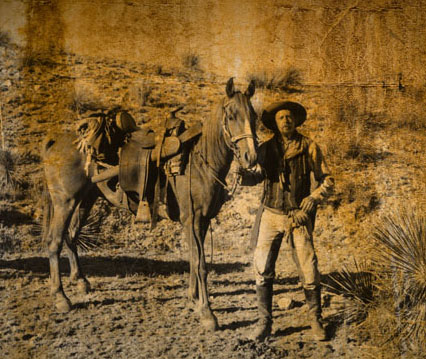 A Buckaroo all funked up to look like
an authentic photo.

While there I photographed one of the Buckaroos who worked on the movie. This was not easy to do (see photo prohibition, below): 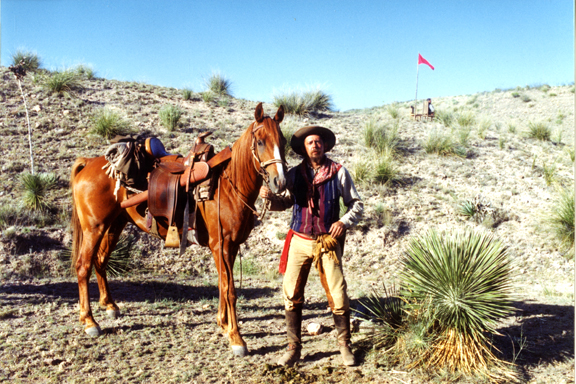 Buckaroo Logan Clark as one of the Red Sash Gang
on the set of "Tombstone" in June of 1993.


I was the guest of Jeff Morey, who was the historical consultant on the film. At the time I was doing a radio show in Scottsdale and after I got off the air, I drove two hours to Tucson, where I picked up Jeff and then we drove down to Sonoita and on to the film site which is another hour and a half. We got there around two and the crew was filming the Earp party—the Vendetta Riders—attacking a remote cowboy camp. They were set up in a rugged draw. 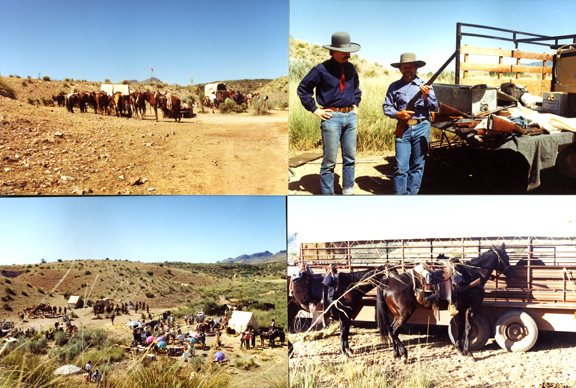 Here are a couple more shots I took of Logan and his mount. That is a "cowboy flag" flying above the camp. None of this sequence made it into the final film.


The Buckaroos were a group of mostly California guys who loved the Old West and went to great pains to gather authentic gear and weapons and clothing. Peter Sherayko, who also stars in the movie, got them the gig for $750 a week, "whether they worked or not," he said. Peter also added there were about 40 of them, and, " Most times they camped out other times they had a hotel room. They also got per diem of a couple hundred a week. Whiskey and women were their choice and there was plenty of both."

When I was there they actually camped out on this remote site, while the stars and crew motored in each day from Tucson, where they were staying at the Holiday Inn. Living out on the land like this, the boys looked a little crusty, which also added flavor to the look of the film.

Peter also told me that since Tombstone "we've done over a thousand shows. Films, TV, commercials, print, and stage. Most notably we had a hundred buckaroos working on "Deadwood."

"Many of them are independent, ie, not working for someone. Horse trainers, farriers, gunsmiths, artists, musicians, historians, saddle makers, leather workers etc. Their common interest is a love for the west and wanting to make shows historically correct. They are also horsemen and gunmen, so they know their stuff. As well as costuming. One of the reasons we created them is: when a company hires actors from central casting, they have to dress them, use a wranglers horse and a rented gun, without knowing the actor knows what he's doing. I made it easy for the production company. They get quality guys that know what they're doing for a cheaper overhaul price. For your answer, yes I created them."

As soon as I walked on the set, an assistant pointed at the camera around my neck and barked, "No photos!" I raised my hands as if surrendering to the law, and shook my head. To my credit, I was good for almost the entire time I was there.

And, of course, the photo I couldn't resist taking, was this one: 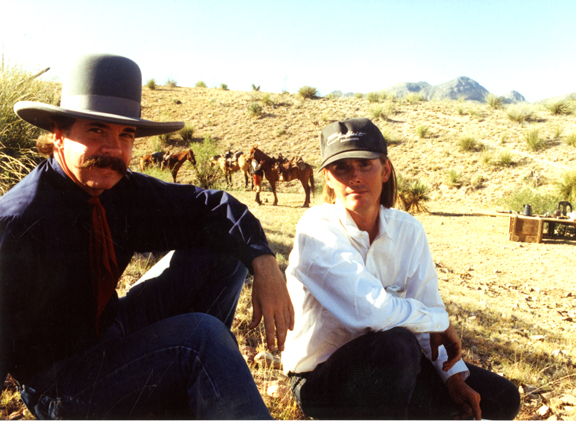 All of the above photos were taken after this one, which shows the director and writer of the screenplay, Kevin Jarre, on the right, who was even then in the process of losing his gig. After the admonition about no photos, Jeff, myself and my daughter Deena, 13, took up a position overlooking the film set. 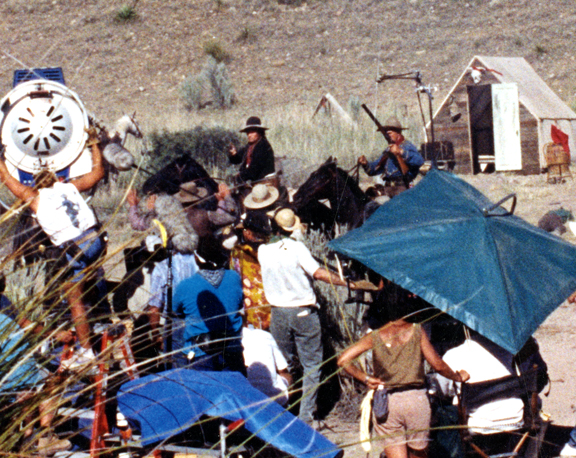 Our view from the hillock. That's Buck Taylor, at right, on horseback.

Anyway, it was a historic day, for me, and for the crew. After Jarre was fired, Kurt Russell allegedly directed the film with a stunt double director. The real story will appear in a forthcoming book, tentatviely titled, "Hell's Coming!!! And I'm Coming With It!": The Making of The Film Tombstone."

Film history buff John Farkis lives in Brighton, Michigan. He is the author of Not Thinkin’...Just Rememberin’: The Making of John Wayne’s The Alamo and Alamo Village: How a Texas Cattleman Brought Hollywood to the Old West. The Tombstone book is due out in Winter of 2018, just in time for the 25th anniversary.

"It doesn't take much to get the budge on a dub like you."
—just one of the classic lines from Kevin Jarre's brilliant script