November 12, 2017
I was walking up Old Stage Road this morning with my hoodie up (55 degrees out. Brrrrrr!!!). The air was crisp and I noticed the Seven Sisters were crystal clear. (thank you cataract surgery!) I found myself doing what I often do on these daily walks, which is thanking the Universe for having another go at it all. So many of my good friends, like Elvis, have already left the building. The other thing I think about on these walks is whether I am ever going to get a clue about how to accomplish my goals. And by that, I mean:

The Inkling
Yesterday, in a flurry of painting, I worked on a slew of different paintings, one after the other, throwing them on the floor behind me when I ran into an obstacle, or thought I had put enough wash on, then I would grab another half-finished effort from my reject pile and go again. At about four o'clock, I was so stunned by the amount of paint slung around and the multiple sheets stacked around my feet, I actually hauled them out to the breezeway and counted the pieces. Lots of dust, of course. Mickey Free is in there, as is Lt. Beale and his Camel Corp, plus Olive Oatman backgrounds for her upcoming starring role. Oh, and The Mexicali Stud, which has some resonance now with all the penises going rogue and brought to justice. I think I have a thing or to add to that conversation since I have one and have been known to use it on occasion.

According to Webster's, an "inkling" is a "slight suspicion or vague notion" you might be on to something. As in, "I think I have an inkling on how to do a successful painting." I am also acutely aware that I don't have much time left. My partner Ken was recently bemoaning his fading physical prowess (he's in his mid-fifties) to which I responded: "You damn Baby! I'm staring down Eighty!"

Of course, sometimes when we have an inkling, it's so vague as to be unimportant. Spotting the real thing has its own issues.

"A man who tells you he's no fool, has his suspicions."
—Old Vaquero Saying

I have a distinct memory of leaving an End of Trail Art Show outside Albuquerque at four in the morning to drive home. I think this was in 2006 and I was cruising westbound along I-40 as the sun started coming up and I noticed it lit up a bank of ridges to the north as I approached Gallup, New Mexico. I kept looking over there trying to memorize the lighting effects on the tops of the ridges. When I got home I did a study of the memory, but never finished it. Until I spotted it in my reject pile yesterday: 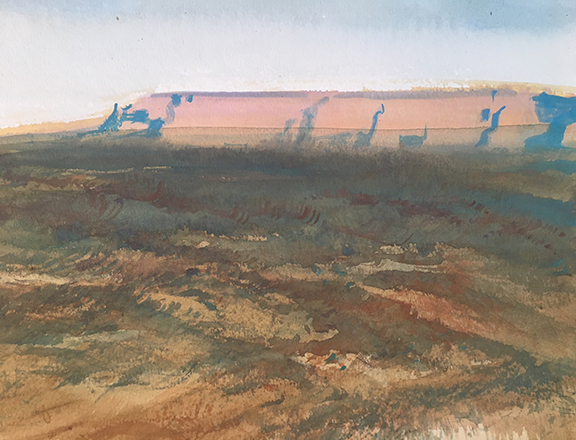 Daily Whip Out: "Sunrise On The Res"

"Memory is like a long broken night."
—Graham Greene

Of course, when I say I have an inkling, it involves more than just painting good:

True. But, for some reason this embarrasses me. I'm half-ashamed of "hunting fame." It seems so infantile, but it's the truth, so what else you got?

"We all want to be famous people, and the moment we want to be something we are no longer free."
—Krishnamurti


Shit. So we are blessed if we have a passion for something and we are cursed if we try to seek it and be the best? So, are we better off just being in the present, the now?

"The now, the here, through which all future plunges to the past."
—James Thurber


Oh, great. So, posting this stuff here on my blog and on social media, does it add up to anything?

Okay, I'm depressed. Got anything else?

"I have an inkling this is overkill."
—BBB
Posted by Bob Boze Bell at 9:23 AM