With the F-bomb controversy still raging over the usage of the fornication verb being used willy nilly in "1883" "Yellowstone" and the reigning, and still unbeaten champ "Deadwood," it's time to celebrate the creative aspect of cussing

When readers contact me about what they feel is unrealistic, swearing in Westerns, I have two thoughts about it. The first is that the old Westerns we grew up on didn't have explicit swearing but that doesn't mean Old West characters didn't swear. And two, I am amazed at how creative Westerners, not just the men, were in avoiding curse words.

First a story from my youth. In 1970 I moved to the big city (Phoenix) and got a job as a rear chainman at APS (Arizona Public Service) working on a survey crew tasked with putting in flagged locations for J-boxes (junction boxes for electricity) in all the new subdivisions springing up all across the desert. Our crew chief, Ralph Tisdale, was an old Texas cowboy, and he was very fond of saying loudly and often, "Heiffer Dust!" as a stand in for stronger epitaphs. This phrase so tickled me, I used it as the catch phrase for a cartoon character I created in 1972 and published in the Razz Revue: 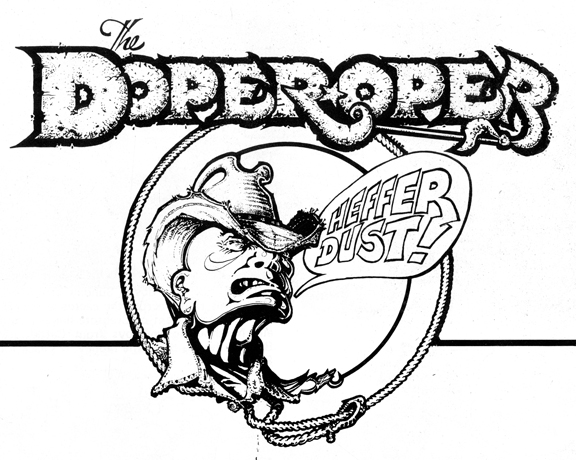 Here is just a partial list of creative cowboy cussing:

• Tarrnation, usually preceeded by What in the. . .

• Yessiree, Bob (not really a swear dodge but used by smart arses everywhere

• Jackwagon, as in, "You worthless Jackwagon!"

• Sufferin Succatash! Okay, this is the signature saying of Sylvester the cartoon character, but it's allegedly a dodge from "Suffering Savior," which is taking the Lord's name in vain pretty seriously

• Hell's Bells! (dang close to swearing and we wouldn't recommend using it in church)

• Sonoma Beach! (a very clever dodge on S.O.B. and a personal favorite)

• What in the Sam Hill! (my grandmother Minnie's favorite oath)