I was looking through my Franklin Daytimer archives for an episode of stress related hyper-active thyroid and I ran across this little tidbit:

September 29, 1996
Took Thomas Charles (age 13, and his friends) Bill Glenn, Alex, and Raf to the Edgefest show at Compton Terrace (named for Bill Glenn's uncle!). Got there at about three and because of my radio connections (the Edge was the sister station of Young Buck where I was on the morning show) I had full backstage access and we were allowed on the stage and saw "The Voodoo Blowskulls" and "The Butthole Surfers" The lead singer got hit in the face with a slurpee thrown from the crowd and they left the stage after two-and-a-half songs. The Stage Manager and Shelly (Program Director at the Edge) had a pow wow right in front of me regarding payment of the band. S.M. pushed for payment saying, "Their lead singer just got hit in the face with a bottle. Do you want to take them on in court or pay them?" 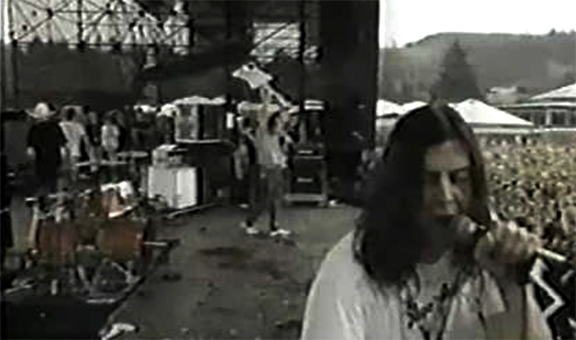 We were standing over there behind the drummer at stage right. Next up was "The Funk Junkies." Really angry stuff. Many bottles and shoes hitting the stage.

Ah, for the old days when a Slurpee to the face actually meant something.

This just in: Bill Glenn (remember, the kid whose uncle is Bill Compton, the man Compton Terrace was named for) sent me this: "I still have a shirt from this show. We were on stage while the band The Phunk Junkeez we’re playing (my favorite band at the time.)  They we’re throwing t-shirts into the crowd and I caught one while we were on stage. To this day it’s still too big for me, but I can’t bring myself to let it go." 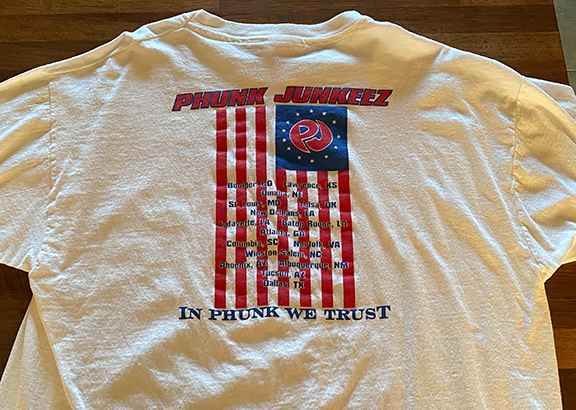 "I was riding my cruiser down in West HollywoodAnd a girl came driving by and she was looking mighty good. Well, I was eating quaaludes like butthole surfers should. She left me there, right there where I stood."

—The Butthole Surfers, lyrics to self-titled song, one of the few stanzas I dare even quote