For The Love of Tombstone

June 29, 2015
Had a great time in Tombstone over the weekend. Met some great people, had some damn good barbacoa, heard some tall tales, stayed out at Monument Ranch (named as such because it's near the Ed Schieffelin Monument),  filmed all morning yesterday with a BBC film crew shooting a documentary on the Old West in 3-D. Thanks to Steve Goldstein, we were treated to lunch at Big Nose Kate's where one of the British crew, danced on the bar: 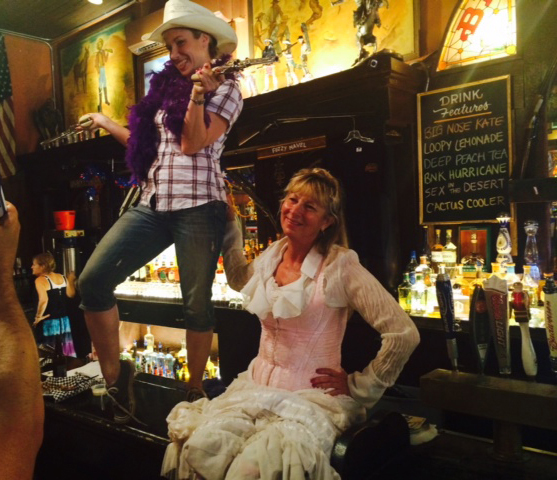 But, not everybody was happy to see me in Tombstone. Got this on Facebook today:

"Why are you wasting your time here in Tombstone? This town needs to die, the current crop of transients that want to call themselves residents are drug addicts, drunks, liars, and thieves. When you didn't even rate the town a few years ago the business owners cussed your name and vowed to run you out of town."

All true (the part about many in town being upset with me about criticisms we made in True West about authenticity issues Tombstone had several years ago), but I still love that damn place. Shared this with a couple of my friends and got this response from Kid Ross:

Here is my take on this sort of stuff. A historical event happens which eventually moves into myth.  Because it has the ability and the POWER to become mythical, everyone wants to define what that meaning is.  But they go at it via history...and history is only the foundation of this event.  It can supply dates, times, names, numbers etc. but history can not describe the myth nor the mythical.

So, people who don't understand the "doppelganger" aspect of this sort of thing constantly argue the HISTORY of the thing.  When the Facebook guy asks "why are you wasting your time here in Tombstone" he is asking you about the physical town itself: why are you here in this actual town?  What he doesn't realize is that you are there for the town, the time, the place, the people that once WERE there.....you are visiting merely the physical representation of the mythic Tombstone.  I am surprised people like us aren't driven over by cars as we wander thru the streets lost in our revery.

It's like Spock says in "Specter of the Gun" (the episode on Star Trek when they wind up at the OK Crral): "none of this is real."

So this guy who is ranting about the town today and the drunks etc. is caught up only in the historical perspective.  AGAIN: go back to George Mallory....New York City......1923......after giving a talk on the first attempts to summit Mt. Everest, he is asked, "why do you want to climb Mt. Everest?"

How the question was phrased and in what manner was it asked we don't know.  Was the reporter asking it as if the attempt was foolish or was he truly bamboozled by why would ANYONE, in their right mind, try to climb that damn mountain?

But Mallory's answer could stand for everything that you and I love on that deepest, deeper, level.  Mallory said, "because it's there."

now....how did HE mean that?  Was he being flippant?  Was he exhausted after giving so many talks and was just tired of these damn reporters?  Or was it "zen"?  Did he respond with a zen masters reply?

So even Mallory's answer posed merely another question.

And as long as we, or anyone else, tries to dig up the true meaning of the OK Corral (or "why Tombstone" or "why Everest") using the historical perspective ONLY, then the answer AND the ultimate truth, will elude them.  And because they don't even have an inkling of the existence of this other mythic realm (and it DOES exist.....it is exactly what I paint) then it will ALWAYS elude them; and they will look upon us (the "true believers") as they did Mallory, i.e. as complete fools.

But the fool is always the wisest one.  He can play the fool because he already knows the truth.

This is why O'Reilly's series is so boring to me.  He is merely rehashing the same old story from the same old HISTORY angle......and you'll NEVER pierce the profundity (thank you for that one, Herman Melville) by going down that same old tired road.

The question that needs to be asked and the answer that needs to be explorer is WHY does this transformation happen?  How DOES Leonidas and Travis, Gordon and Mallory, move with such ease from this world into that other world, the world of the Great Mystery.  As a new and different world it has it's own meanings and vocabulary......it is NOT beholding to historical fact...it does NOT function under the rules of natural law.  It is a nether world, a dream world, that really exists (and, as Pat Garrett once wrote about the Kid, I speak of what I know.)  Again, to quote Spock, as he and the other members of the Enterprise crew stood in Tombstone (and it had a reality to it) "none of this is real."

But until your eyes are open and you can grasp this reality (the real reality of that which is unreal) then you have no chance and you are FOREVER stuck in this kinda boring world of natural laws and our own drunken reality.

I know what happened to me that magic June day in 1976.....I saw and felt that nether world.  I KNOW it.  So now today I can move between those two worlds with the ease
of George Mallory climbing some rocks in Wales.

Yesterday Rachel and I visited with Romona Scholder, Fritz's widow, who lives not 6 minutes from me.  We were with her for an hour.  When we left and were driving back to Lamy EVERYTHING I SAW, the mountains, the bushes, the clouds, the sky, the pink roses of the blooming cactus, all became a massive painting by Fritz Scholder.  It was like we were driving into a canvas of his that covered the entire universe; it was BEAUTIFUL.

Very few people can do that.....very few (if any) can even grasp the concept of the existence of this "other" world....but it is all around us and, most importantly, IN US and we don't even know it.

This is why I rant against the Howard Terpenings of the "art" world.....they are showing me what I already KNOW exists; I see it every damn day.  I want artists to show me the world of their mind and the world of their soul and of their dreams....I want to see how THEY see the very same world that I do.  This is why the entire landscape we drove thru yesterday, for the period of maybe 3 minutes, was ALL Fritz.  I was fucking beautiful.

So when people like this Facebook guy asks such stupid questions I just shake my head in real pity.  The real world of the Most High Truth is right there in front of him and all around him and he can't see it.  What a dull dull dull DULL world that must be.

So when these "historians" etc. argue about the location of Co. "E" at the Little Bighorn or what Virgil meant when he said, "Hold! I don't mean that!" or how did Davy Crockett die.....I, the fool, just shake my head and walk away; it's not worth the time because it doesn't GO anywhere.

The answer lies inside you......as Old Lodge Skins says at the end of "Little Big Man":

"Thank you for my visions, and my blindness in which I saw further."

One must close your eyes (basically deny the confinement of natural laws) and see with your heart......you will see much farther, deeper, and truer.

I've been to the Tombstone the Facebook guy is talking about......I just prefer the one I visit which exists in my heart...now THAT'S Tombstone!

"I would have written you a shorter letter but I didn't have the time."
—Mark Twain