June 16, 2015
First day in the pool yesterday. Got attacked by a giant toad after I swam laps. Came out of a return duct and jumped on my arm. I think I cleared the water getting out of there. Pool skimmer is broken so I couldn't get under him (he dove to the bottom) to get him out of there. The bastard is still in there. I'll deal with him this afternoon.

Recently, I thought I heard an author make the claim that Wyatt Earp wasn't all that smart. This shocked me, more than I am comfortable with admitting. So I attended a book signing and asked the author point-blank exactly what she said and here is the quote: "Ike and Wyatt had a great deal in common. They were the same age. They both had fathers who were considered unusually brutal, even in a time when beating the hell out of small children was considered good parenting. Neither of them was well-educated and frankly, I don't believe that either Ike or Wyatt was working with a triple-digit IQ."

This is from Mary Doria Russell. Her new book "Epitaph" is an excellent read. She elaborates: "If they'd lived in the 1950s when IQ testing was common, they'd have come in a little below average, is my guess. I'm not saying that Wyatt was stupid, I'm just saying he wasn't a great intellect. He does seem to have been rather rigid in his thinking and when you see the world in black and white, you can be vulnerable to manipulation by those who are more agile intellectually. Johnny Behan, for example." 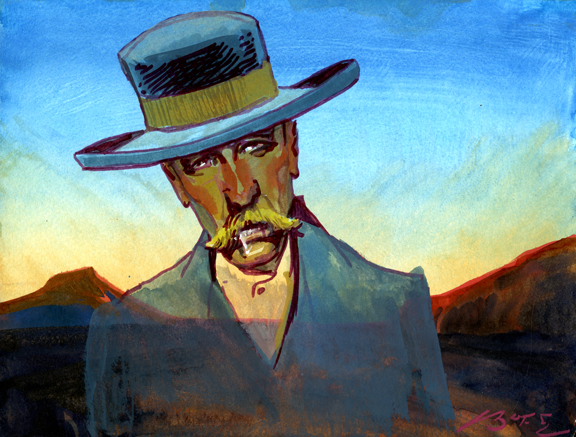 The question forces us—okay, at least me—to examine why this claim upsets us. Is it because, in spite of Wyatt's many flaws he was a man of action and resolve and we naturally think of him as superior both physically and mentally to his enemies? I think so. And to be lumped in with that frontier idiot Ike Clanton. Really?! But, to the degree that we get upset, I think it reflects how invested we are in the character. The more the upset, the more likely there is some truth to it: "I think thou dost protest too much."

And speaking of the Bard, I love Wyatt's line, when Tom Mix suggested that he and Wyatt read Shakespeare to gain some culture:

"He sure was a talkative guy. He wouldn't have lasted long in Kansas."
—Wyatt Earp