Wyatt Looms Large On The Colorado

June 15, 2015
The Kingman Junior High Bobcats were on their way to play Poston on the Colorado River. A second-string guard fell asleep on the bus somewhere south of Needles and when he awoke he saw a strange apparition: a giant Wyatt Earp figure, taller than the bus, looming in the twilight. 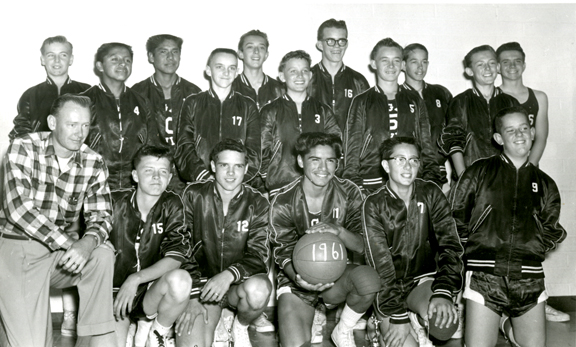 The Kingman Junior High Bobcats. The sleeping guard is standing, second from right .

The cheap wooden sculpture, long since gone, was a tourist trap novelty-come-on at the Drennan Store (Earp). The little guard scoffed at the absurdity of Wyatt Earp being out there in the middle of nowhere. He religiously watched the TV show on Wyatt starring Hugh O'Brian and knew the frontier marshal was famous in Dodge City and Tombstone, but out here in the Colorado River bottom boonies? Ridiculous.

I thought about this early impression as I studied Wyatt's last years when he was desperately trying to get Hollywood to tell his story. From about 1905 to 1927, Wyatt and Sadie summered in Los Angeles and then headed out to their Happy Days mining claims, via wagon, when it got cool. Evidently Earp had a little mining shack at Drennan and a camp out at the mines and a third dwelling in Vidal, near Vidal Junction, several miles to the west of the river. Earp roamed all over the Colorado River basin, with numerous stops in Parker, Yuma, Needles and the mining camps of Oatman, Goldroad, Mineral Park, Chloride and White Hills. Think about this: Wyatt Earp spent 22 months in Tombstone and he spent 22 winters along the Colorado River.

Daily Whip Out: "Wyatt Earp Looms Large On The Colorado"

"It has all the exciting qualities of a dime novel, the added value of authentic history, and the curious virtue that it might be used as a Sunday School text or a Hollywood scenario."
—Lewis Gannett's review of Frontier Marshal in the New York Tribune
Posted by Bob Boze Bell at 9:59 AM