Wyatt Has to Wear Shades

June 17, 2015
Sometimes my library stuns me. I am often amazed at what I actually have (I just can't find it half the time). I'm working on researching Westerns from 1896 to 1929, to get an idea of what was going on in the film business before and during the time Wyatt Earp was trying to get his story told. Of course, after he died, his story took off and we look back at the 35 plus films based on his life and assume the story of Tombstone and Wyatt Earp was always there.

I must have 35 books on Westerns and at least a dozen on the history of Westerns. For the past several days I have been looking through them all trying to find a Western, before 1930 that deals with Wyatt and Doc and the Tombstone story we all know so well. Now granted, both Doc and Wyatt are minor characters in William S. Hart's 1923 film "Wild Bill Hickok" but even here I believe the story concentrates on Kansas and the plains. So it is an exception, but a minor one. Like Vincent van Gogh selling one painting. 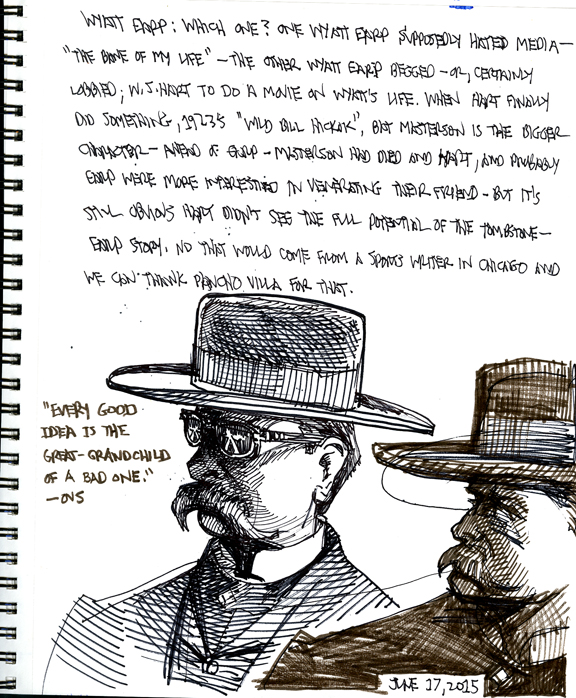 Daily Whip Out: "The Future Is So Bright Wyatt Has to Wear Shades"

My theory is that the Tombstone story came late to the dance. If you know of any exceptions to this I want to know about it.

"I ask for your indulgence when I march out quotations. This is the double syndrome of men who write for a living and men who are over forty. The young smoke pot, we inhale from our Bartlett's."
—Rod Serling
Posted by Bob Boze Bell at 11:29 AM