How Famous Was Wyatt Earp Before Frontier Marshal?

June 25, 2015
Many Earp buffs believe that Wyatt Earp was not all that famous before the publication of the books, "Tombstone" and "Frontier Marshal," and that his fame went through the roof after the books came out and then everyone sort of assumed he was always famous, back dating his fame, as it were, to the events in Tombstone. That belief, that Earp was not that famous nationally, prior to the books and movies, took a hit yesterday, at least for me. Stuart Rosebrook, our book editor, forwarded me quite a few links to east coast newspapers covering Wyatt Earp. This is a good example: 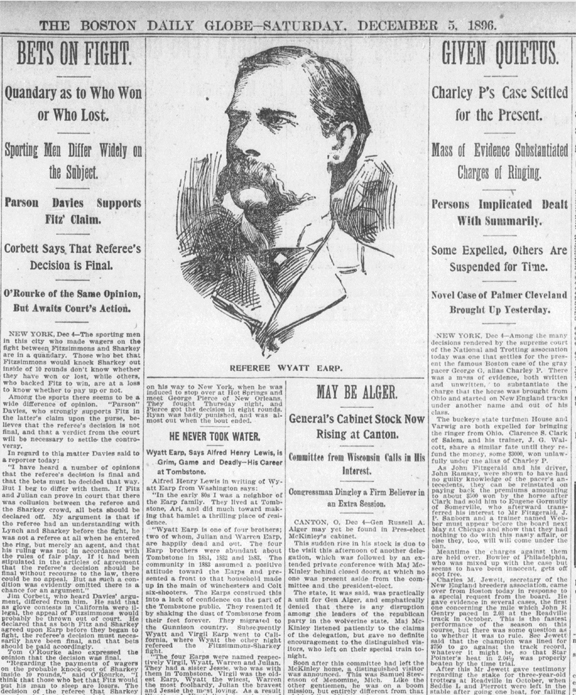 The article is about Earp's controversial refereeing of the Fitzsimmons-Sharkey fight in San Francisco, but as you can see it's front page news. Also, that is an excellent illustration of Earp from the famous photo of him taken while he was in San Diego, circa 1885. Now, some may make the claim that this is a more negative, or infamous fame, kind of like the NFL's "Deflategate" and Wyatt is the trainer who took the air out of the balls, but still, this is pretty well known, if you ask me.

And by the way, the long mustaches are from his San Diego realtor days and speak more to his salesmanship look, than as how he probably looked in Tombstone. While he may have had significant handlebars at the O.K. Corral fight, it's more than likely his style, in terms of length, was more in the Morgan Earp zone.

"My father lived to be 96 years of age and he always kept liquor in his house. That's a better way than this prohobition business which results in just as much liquor traffic but much worse liquor."
—Wyatt Earp, in the Los Angeles Record, October 19, 1928