June 26, 2015
For a guy who claimed to hate telling his story, Wyatt Earp sure told it plenty of times. In 1896, The San Francisco Examiner ran a three-part feature on Earp's adventures on the frontier and all the basic plot points are in place, with a few misspellings here and there. By 1915 he's actively trying to produce a book with a mining engineer, John H. Flood, acting as his ghost writer. When that fails, he is interviewed by Walter Noble Burns, then Stuart Lake. Each time he tells the same stories with slightly different details. Both the Burns and Lake accounts are similar, although Lake amps up the number of gunshots wherever possible. If Burns has Wyatt dodging two bullets at the Tucson train station, Lake has him dodging four (and, for the record, there were no bullets to dodge at the Tucson train station, unless your name was Frank Stilwell). 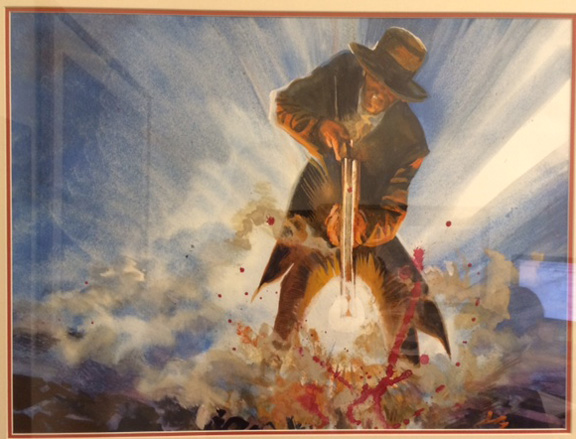 Daily Whip Out: "Wyatt Gives Both Barrels to Frank Stilwell"


I once had the theory that if I could read the Flood manuscript I would hear Wyatt's voice unadorned, without the hero worship and exaggerations. Well, Mark Boardman sent me his copy of the Flood manuscript which I received on Monday and I have been pouring over it ever since. It is a tough slog. Here is Wyatt talking about how he found out about the Benson stage robbery attempt in March of 1880 (Flood's type written quote styles are kept intact):

A few minutes before eleven p.m., the United  States Deputy Marshal at Tombstone was summoned from his rest in the Grand Hotel by the ringing of the telephone bell.

"Benson: I just got in." "The coach was attacked Wyatt; just after we left Drew's ranch." "Bud Philpot and a fellow on the dickey seat were killed and the horses ran away."

"No, they all got away but they left a trail." "I think we can have a pretty good chance of nabbing the whole crowd." "Can you come down right away?"

""Yes, right away; I'll get Virg and Morg and Bat." "It'll be thirty minutes before we get started; we'll meet you at the ranch at daylight." "Are you alright yourself?"

But the only reply was a jumble of words, and then he heard the telephone ring off at the other end of the line. 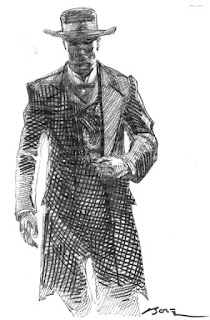 End of page, end of quotes, end of credibility. While it's true Tombstone had telephones in 1880, they only connected the Grand Central Mine to the Tombstone Stock Exchange (and Tucson had a modest line that connected the mayor's office to city hall). Long distance telephone coverage between Benson and Tombstone was at least a decade away from the events of 1880.

Reading on, we discover that Wyatt adheres to the Philpott changing places with Bob Paul theory even though  author John Boessenecker, who wrote the definitive bio on Bob Paul, says it's hooey and tells us convincingly that the switching places story stemmed from one of the outlaws making that claim much later to cover their dastardly deed of shooting the driver dead. Granted, Earp may have believed that story from the get go, but Bob Paul didn't buy it and he and Earp were friends, so it seems curious.

Here's Wyatt quoting Bob Paul from the Flood manuscript, " "Poor Bud Philpot, he wasn't feeling well last night and I had just changed seats with him to spell him a bit, and he toppled over at the first crack."

Wyatt also claims the outlaws never said a word, but just opened fire without warming. He has Bob Paul saying this as well, which is at odds with Paul's own account that the outlaws shouted "Hold!" and Paul retorted, "I hold for no one," at the same time unlimbering his Wells Fargo shotgun and blasting the darkness in the direction of the voice.

Incredibly, Earp seems uniformed about this incident in spite of the fact that he was a major player in the posse that chased the outlaws the next day. He was on the ground, in the center of the action and yet, I hate to say this, but he seems clueless. Half the stuff he remembers is wrong. If he was grilled by today's historians he would be cut to shreds and no doubt would come off sounding like some dim wit Brushy Bill. What does this say about remembered history and human folly?

Plenty. The faintest ink is better than the best memory (a placard on display at the Tucson Historical Society).

"The real story of the old west can never be told, unless Wyatt Earp will tell us what he knows; and Wyatt Earp will not talk."
—Bat Masterson, according to Stuart Lake
Posted by Bob Boze Bell at 11:20 AM