July 3, 2015
When I was in Tombstone last weekend I spied a cool photograph at the Rose Tree Inn of two cowboys at a branding. I believe the year is 1883. I was just talking about how Wyatt Earp doesn't look authentic in big brimmed hats. Perhaps it's because it makes him look like a wannabe cowboy and you can say a lot of things about the old gunfighter, but Earp never claimed to be a cowboy. Check out these big brims: 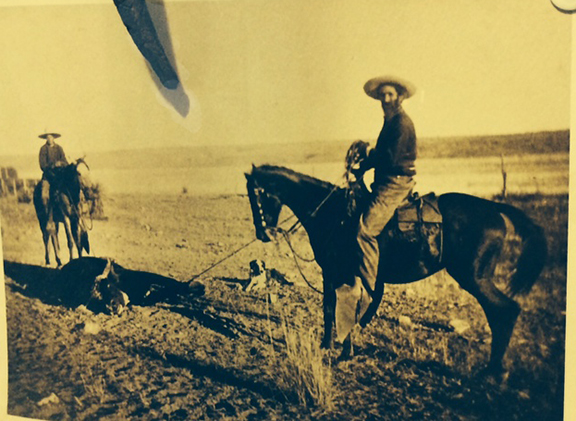 Got out for my walk this morning at 5:30 and it was cloudy which made it cooler (low eighties), coming back it started to rain and I had to seek shelter on Bev's patio. Kindah fun. Rain is so rare out here. 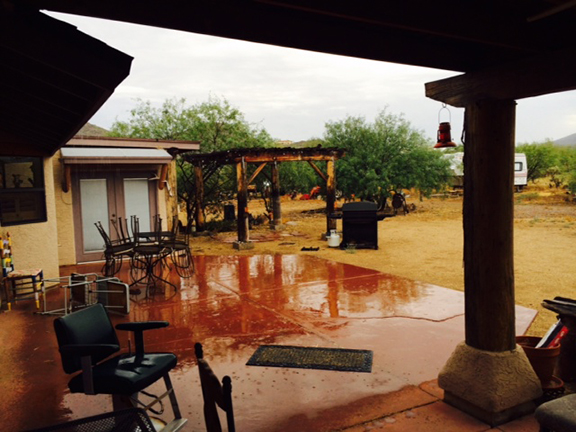 Seeking refuge on Bev's patio this morning at six a.m.

Did Wyatt Earp Really Rescue Two Women From A Tombstone Fire?
I thought the chapter in the Flood manuscript where Wyatt Earp rescues not one, but two women (one an invalid!) from the Tombstone fire of 1881, was suspect, but here's an intriguing counter view from the record:

"Wyatt was made secretary of the Tombstone fire brigade after the big blaze, so maybe there's some truth to this story?"
—Mary Doria Russell, author of "Epitaph"

Very interesting. It does make sense that Wyatt would be protective of the safe in the Oriental Saloon, since he had a part interest in the place and the fire started three doors east of there, so that rings true. Saving the invalid woman though, seems a bit too rich, for my experience at reading the record, but dammit, Mary Doria, you make a good case for it being possible and, in the end, that's all we have to go on, is the meager record and our gut.


I'm trying to make connections, connect the dots during the twenties when the Western was about to absorb a new story line into the old west playbook. It appears to me the gangster film influenced the Western, or lent it a new genre of storyline that had not been present from 1896 to 1929. A feud (it was known as the Earp-Clanton Feud in the press) turned into a law and order fable.

I asked one of my best researchers to find me a Western in the above time period that had Tombstone and Wyatt Earp as a theme, or, in the title. Gay Mathis found, of course, 1923's Wild Bill Hickok which has Wyatt Earp, Doc Holliday and Bat Masterson as characters but the movie takes place in the cowtowns of Kansas and not Tombstone. She couldn't find a single film listed with Tombstone in the title. That doesn't mean Tombstone wasn't a setting or alluded to, but I still think it's incredible that Tombstone is not a staple of movie plots until the 1930s when gangster movies finally made it okay for armed gangs to confront each other. But, Gay did find this, as it relates to the conflating of gangster movies and Westerns:

Toronto Star Weekly--November 6, 1920
"Now the States had a Wild West. It was as good as the movies portray. It had faro, dice, wide-open towns, bad Injuns, red eye, gamblers in frock coats, Bill Hart bad men, discriminate and indiscriminate killings, and all the jolly features."
"The Wild West hasn’t disappeared. It has only moved. Just at present it is located at the southwestern end of Lake Michigan, and the range that the bad men ride is that enormous smoky jungle of buildings they call Chicago."
—Ernest Hemingway
Posted by Bob Boze Bell at 3:11 PM