June 31, 2015
As I've been reading the Flood manuscript I keep trying to see where Wyatt's wife Sadie may have meddled with the story. All the accounts from relatives she worked with say she was ferocious in her efforts to hide her shameful past. She was mortified by Mattie Earp's suicide and that by stealing Wyatt from Mattie, Sadie caused her death. In most places of the manuscript it's hard to tell, but rereading the telephone page, where Wyatt claims to have received a telephone call from Bob Paul in Benson, I spotted an odd detail:

"A few minutes before eleven p.m., the United  States Deputy Marshal at Tombstone was summoned from his rest in the Grand Hotel by the ringing of the telephone bell."

Wait a minute. Wyatt Earp wasn't staying in the Grand Hotel in March of 1880, he was living in a house on west Fremont Street with his second wife Mattie. . .ohhhhhhhhhhhhhhh—I SEE. Never mind.

Reading Between The Lines
I can imagine Sadie standing over the kitchen table and berating Wyatt and John Flood about the original version that probably had Wyatt living in a house in Tombstone. "They're going to think I'm a bad woman," she said more than once when she was working with her relatives on her take of life with Wyatt.

Because of her absolute refusal to talk about Tombstone, people have assumed the worst and she has been described in print as a slut, a soiled dove, a home wrecker and a chronic liar. By all accounts she was difficult. When she was young she was beautiful and, in spite of all the above, one man loved her for 46 years. So, what did she really look like in the 1880s? This morning I took a crack at it. 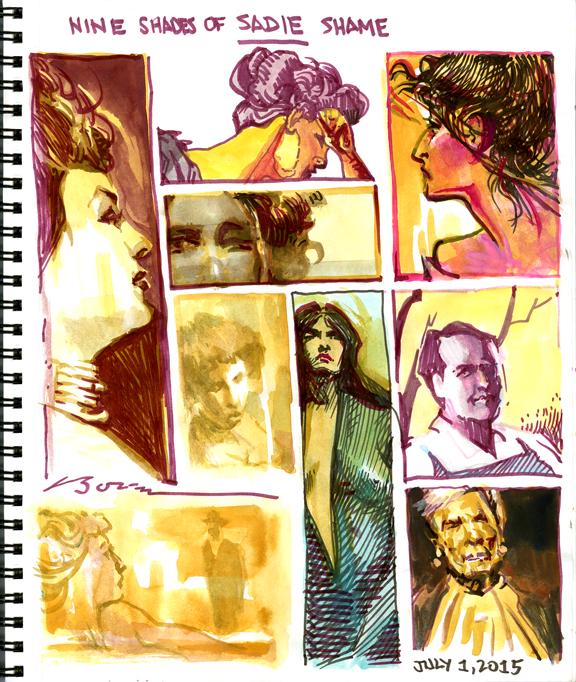 Daily Whip Out: "The Nine Shades of Sadie Shame."

The problem we have is that there are no verified photos of Sadie as a young woman, in spite of the multiple images floating around, and especially the so-called Kaloma photo that Glenn Boyer foisted on the public with the publication of his "I Married Wyatt Earp" travesty. You know, the one of the pin-up babe in the sheer slipover from 1911. Boyer has contaminated the Earp water hole so badly it's almost impossible now to think of Sadie without thinking of the damn Kaloma photograph (which is why I included it here). It's unfortunately part of the legend now and I'm not sure we can remove it.

Speaking of authentic Sadie Earp photographs, got this from Casey Tefertiller this morning:

I have been told that John Gilchriese had a picture of Sadie probably from the 1890s, maybe a little later, being fun and playful, smoking a pipe, probably in San Diego. Several folks saw it, and it it is probably the youngest picture of her that exists. It has not surfaced since Big John's passing.

She must have been quite attractive, with, of course, bountiful bosoms.

By the way, I refuse to call her Josie. She was Sadie all her life, through Tombstone and until after Wyatt's death, when she tried to move her past one more notch away from her guilty conscience.

"The further a society drifts from the truth the more it will hate those that speak it."
—George Orwell
Posted by Bob Boze Bell at 11:00 AM