July 27, 2015
In my humble estimation, it is the defining moment in Wyatt Earp's life. Resolute and determined, four men turn the corner on Fremont Street on a blustery, cold day. Taking the middle of the road, they walk shoulder to shoulder to personally confront hard men who have threatened their lives.

Worked all day yesterday on sketches and prep work for this scene:

The kitchen table loaded down with walkdown prep.

Got up this morning and took a run at it: 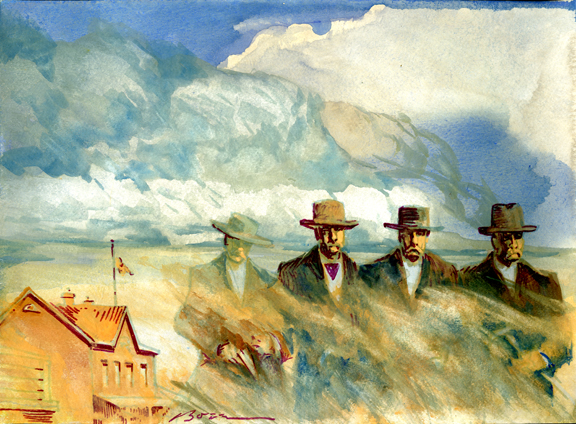 The clouds work for a blustery October day in Tombstone, but need to see more of the walkers and the Schieffelin Hall scale is off, need to tip the horizon to pop the quartet to make them more skybound yet keep them in the same scene with the building. Ideally I'd like to get in the O.K. Corral sign on the right, although by that time in the walk, they were moving back onto the south sidewalk. Still, I think I can fudge that into shape. Too much dust equally distributed. Needs to be more erratic as actual wind gusts would be. Still not aggressive enough on the body positions of the walkers. Needs work. Halfway there. Running out of time. What else is new?

Okay, went home for lunch and took another run at the painting. Couldn't fix the design but did try and attack the dust to make it more organic and definitely brought out Doc Holliday more. Not perfect, but will have to do for the October issue. 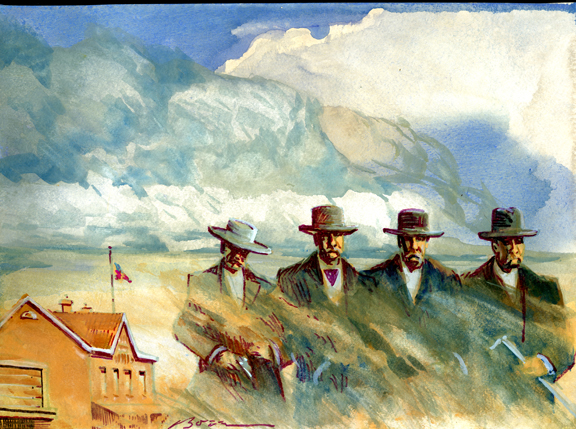 Oh, and yes, the flag is at half mast because the country was still in mourning for the passing of President Garfield who died on September 19 from an assassin's bullet. He was only 49.

"For great things to happen you need two things: a creative imagination and not quite enough time."
—Old Vaquero Saying