Did Wyatt Earp Have A Sense of Humor?

July 13, 2015
In the Flood manuscript there is one section where it appears that Flood and Earp are trying to be funny. Here it is:

"Something is going on up there Morg; let's go see what it is!"

Suddenly, a man of ponderous avoirdupois leaped across Allen Street in front of the Alhambra, almost at one bound, landing on the sidewalk directly in front of the Grand Hotel.

"Watch that fellow Morg, he's one of them!" shouted Wyatt Earp.

But his brother Wyatt, didn't hear; he already had mingled with the crowd, half a block away, just as officer Flynn had seized John Ringo by the arm and started across the street in the wake of big Ben Leonard, the "flyin' fish."

End of Flood's florid quotes from Chapter XXXV "On A November Afternoon." And, if you think I'm taking liberties with the above text, here is a scan of the page: 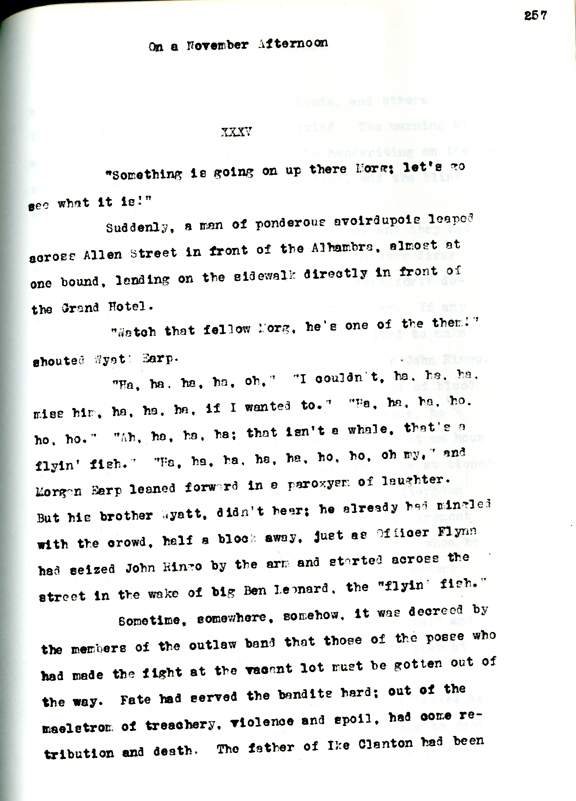 
It appears Wyatt is making fun of "big Ben Leonard" for being fat and looking like a fish out of water. I'm not sure, but given Morgan's guffawing that is my interpretation. That it is totally obtuse and unclear is a hallmark of Flood's writing.

The incident barely being described here is the amazing showdown that happend a couple weeks after the O.K. Corral fight, when the cowboys who should have been at the first fight, showed up for the second: Curly Bill and John Ringo. They, and a gaggle of cowboy cronies squared off on Allen Street in front of the Grand Hotel with the cowboys on the south side of the street and Wyatt, Morg and Doc Holliday on the north side of the street. After some taunting by Ringo, a Tombstone police officer, Jim Flynn, took in the scene and arrested the prinicpals, including Wyatt Earp, and the event ended without a shot being fired. The irony is THIS is how the first showdown should have ended, but for the fact that Doc Holliday mucked up the arrest attempt and opened the ball with his "pea shooter" (the term Wyatt gives the Wells Fargo shotgun in the O.K. narrative). None of this is in the Flood chapter and, in fact, if you didn't know the outcome, you wouldn't know what was going on here.

"Tragedy is when I cut my finger, comedy is when you fall into an open sewer and die."
—Mel Brooks