July 19, 2015
There were a bunch of false starts and fizzled efforts, but when the Wyatt Earp legend finally took hold in the 1930s it hit like an explosion. 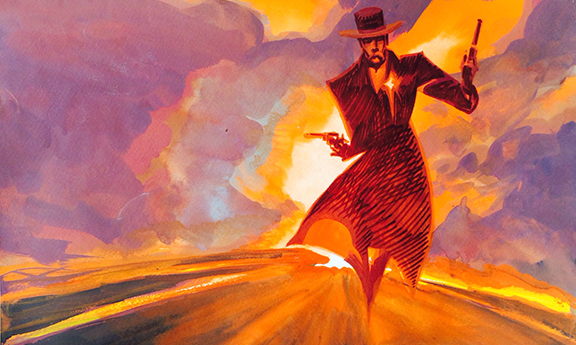 And as the thirties gave way to the forties and World War II, the Earp legend hit a new high with "My Darling Clementine" in 1946, but the pop phenom still had higher to go. In the fifties we get "Gunfight at The O.K. Corral" and then the hit TV series "The Life And Legend of Wyatt Earp." That was the top of the roller coaster and in the early sixites the blow back began with the publication of "The Earp Brothers of Tombstone" by Frank Waters and then we get "Doc," an anti-war flick that implies Doc and Wyatt were gay and by the eighties we get the remake of "The Lone Ranger" (no, the earlier one that was just as bad as the latest one with Johnny Depp) and if you'll remember the crooked lawman was named "Earp." But, of course, the legend got a big rebound in 1993 with "Tombstone" and then "Wyatt Earp" in 1994, so quite a bumpy ride for the old frontiersman who never could sell his life story. In fact, I think I know what his last words were in reference to:

"Suppose, suppose, I actually got paid for my life story?"
—Wyatt Earp as quoted by BBB in a moment of wild speculation
Posted by Bob Boze Bell at 11:42 AM