My Agent and O.K. Corral Writing

July 4, 2015
Went to a Fourth of July party at the Rosebrooks. Here I am with my "agent." This is a joke. Back in 2002, Jeb suggested to the lead dude at the Westerns Channel that they hire me to do True West Moments and they took the bait and ever since, he has called me his agent, as a joke. Jeb wrote "Junior Bonner" and "Black Hole." Ironic, no? 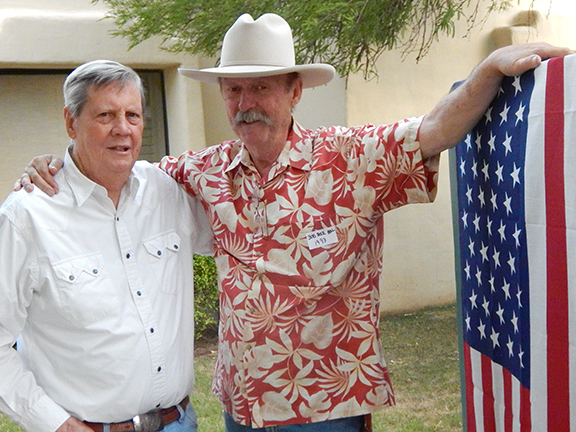 My "agent" Jeb Rosebrook at his front gate in Scottsdale, AZ

Speaking of writing well, our summer intern, Cameron Douglas, left for San Diego and a Masters program, but before he left he gifted me a book on writing.

I am thoroughly enjoying  William Zinsser's "On Writing Well." I think I've learned more about writing in the last three days than in the last 40 years! Ha. Just a couple of my favorites:

"There is a kind of writing that might be called Journalese, and it's the death of freshness in anybody's style."

"The adverb 'good" should be left as the exclusive property of Ernest Hemingway."

"'myself' is the refuge of idiots taught early that 'me' is a dirty word."
—Red Smith

And my absolute favorite: "'Most,' as in 'most everyone' was scorned as 'cute farmer talk' by Isaac Asinov. . ."

Okay, one more for my O.K. Corral amigos:

"Katherine Ann Porter called 'O.K.' a 'detestable vulgarity' and claimed she had never spoken the word in her life."
—Notes on writing, by William Zinsser