The Wyatt Earp Myth: Who Exaggerated And Why?

July 20, 2015
Now that I have a working knowledge of what Wyatt Earp claimed to have done in the Flood manuscript, we can start to see the progression of the myth-making process by comparing Wyatt's claims in the Flood, and then comparing those claims to Burns and, finally, to Lake. Let's start with a controversial episode: did Wyatt Earp stand off the Johnny Behind The Deuce mob single-handedly?

In the Flood manuscript, Wyatt claims that a telephone call to the office of the Toughnut Mine informing Tombstone that "Johnny Behind The Deuce had shot the mine engineer at Charleston, and the Earps were aiding his escape." First of all, it is possible that the news reached Tombstone via a telephone since the mines had the latest technology and telephones connected from the mines to the Tombstone Stock Exchange, so that part, ahem, rings true. The second claim, that the Earps were aiding Mr. Deuce's escape has some validity, since the miners from Charleston who were chasing the killer saw that "the gambling element" in Tombstone was aiding his getaway (supposedly, the acting lawmen, Virgil Earp and Johnny Behan, requested their help). This, of course, incensed the mob because they felt that justice would not be done and that the gamblers of Tombstone were protecting one of their own. A very logical conclusion on the part of the Charleston crowd who didn't want Johnny Behind the Deuce to escape justice for a brutal killing. 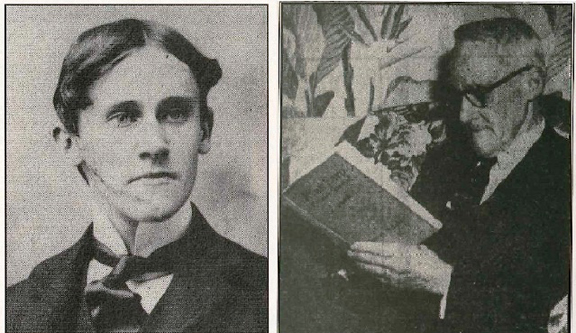 John Flood as a young man and as an older reader of fine fiction.

In the Flood version, earlier in the day, Virgil had taken Wyatt's horse Dick Naylor out for a ride and happened upon the buckboard with Deuce in it fleeing the horde following them. Virgil Earp takes the prisoner up behind him and rides into Tombstone (Burns claims Deuce was rescued on Jack McCann's filly Molly McCarthy)), Johnny blurts out he and the mining engineer were in a card game when the fight broke out. This is not true. Contemporary accounts note that the combatants were in a restaurant in Charleston and Schneider, the mining engineer, insulted Johnny (there is speculation that Deuce was behind a burglary at Schneider's cabin). Burns gives the correct version. Better research? Was Wyatt's memory faulty? Was that the scuttlebutt—the ill-fated card game—at the time and that's the way Wyatt remembered it? Still, Burns version is correct and the Flood is wrong on this point.

In the Flood version, as the mob approached, Wyatt "had planned it all as he heard the first warning rumble up the street, and he began to make his vision real. He sent his brothers Virgil, Morgan and James, and Charlie Smith over to the impromptu jail in charge of the prisoner, and a moment later after locking the door to the place, he followed them to make sure of the barricade."

"And then he stepped into the street." Wyatt claims there were 300 in the mob and they were coming at a run. He describes the scene of the mob armed "with picks and shovels were in their hands, and rifles and shotguns and long bars; implements that they had seized in hate, weapons that would kill and maim." He compares the scene to the French Revolution (that's probably Flood).

And then Wyatt is alone facing the mob and "The venom of reptiles, the malice and the envy of bitter men, the wild, delerious [sic] frenzy of fanatics, the will of hate and vengeance fixed itself in the faces, almost adamantine, of the standing horde." Then: 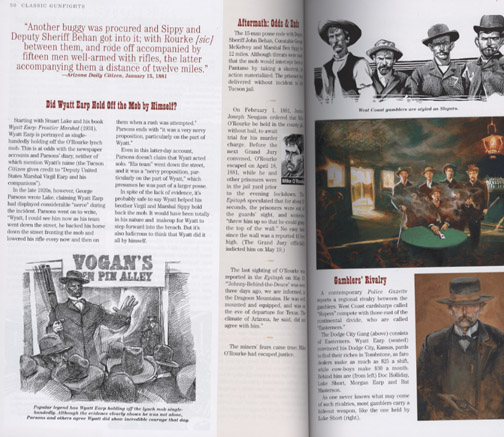 Wyatt Earp holding off the mob in Classic Gunfights II

"We want Johnny!" some one shouted.

"Come and get him!" he hurled back, and he advanced a step towards the mob and they, of course back down.

Here is Burns' version: "Wyatt Earp was dealing faro in the Oriental." Thank you! We never quite know where Wyatt is in the Flood version. We want details, smells, clothing, rifle specs, but no! The constable from Charleston with his prisoner, Mr. Deuce comes running in: "Mob coming. Going to lynch this boy. Hurry up. Do something, for Christ's sake. No time to lose."

Cool as a cucumber, Earp finishes his faro game and closes the box and says, "Hold on to your chips, boys. I'll cash 'em as soon as I've finished with this little business matter." Then Burns adds a classic line: "As a gambler, he pushed back his chair. He rose as an officer of the law."

Sweet. Excellent. Such a wonderful relief from trying to read Flood.

In the Burns' version, Wyatt Earp escorts the prisoner to Vogan's bowling alley and "he posted Virgil Earp at the rear and Doc Holliday behind the locked front door."

And, of course, Wyatt steps into the street to face the "brutes stirring to fury, the note of menace unmistakable." [Burns is so clean and succinct and good and he makes Flood look so bad.]

Burns stretches out the dialogue:

"Where 've you got that murdering rat hid?"

"He's right in there." Wyatt Earp jerked his thumb at the bowling alley. " And he's going to stay in there. He's my prisoner now, and you fellers ain't goin' to get him."

Wyatt Earp cocks both barrels of his shotgun and says, "Come on, then, you yellow curs. Let's see you get him."

"His booming voice was like the roar of a lion at bay as he flung the challenge in the mob's teeth. . .one foot advanced, his shotgun held tensely across his breast read for instant action, Wyatt Earp stood, one man against five hundred."

Okay, so Burns has amped up the number by two hundred (Earp claimed it was 300) and Burns goes to the well one more time about Wyatt being the Lion of Tombstone. It's all very persuasive, because Burns is such a good writer and he knows how to elevate the material to poetry and, ultimately, Myth.

And, so now, we come to Stuart Lake. In his version of the Johnny-Behind-the-Deuce affair, Lake goes with the deadly card game and has Schneider drawing a knife before being shot. That's one point for Burns and minus one point for both Flood and Lake.

As in the Burns version, Lake has the pursued buckboard stop at Jack McCann's but then says, "Yarn-spinners have sent Jack McCann to the constable's aid on his race-mare Molly McCarthy. The horseman who met McKelvey by chance was Virgil Earp, riding Dick Naylor, a thorrough bred animal belonging to Wyatt."

So Lake give Burns a slap down and one-ups him to boot. Moving on to Tombstone, in Lake's version, "Virgil found Wyatt and Morgan at the Wells-Fargo office."

"Take him into Vogan's," Wyatt told Virgil and Morgan.

"Five hundred blood-lusting frontiersman poured into Allen Street as Virgil and Morgan got Johnny-Behind-the-Deuce into the bowling alley. Wyatt stood alone at the curbline, his shotgun in the crook of his arm."

The mob wants Johnny, but Wyatt is rather quiet. He says, "Boys, don't you make any fool play here; that little tinhorn isn't worth it."

Lake quotes Wyatt as saying, "Most accounts have me cursing that crowd plenty, but that was no time for hot language."

In Lake's crowd, "every man had a shotgun, rifle or six-gun, ready to pour lead into the lone peace officer."

Okay, so both Burns and Lake have amped up the crowd number from 300 to 500, none of them agree on who was where in terms of the prisoner (Wyatt has Virgil putting him in the impromptu jail and Burns and Lake have him in Vogans). The dialogue is all over the place and Wyatt seems to get braver and braver with each telling. So what did the contemporary newspaper report say of the affair? Here's the January 17, 1881 Tombstone Epitaph:

"In a few minutes Allen street was jammed with an excited crowd, rapidly augmented by scores from all directions. By this time Marshal Sippy, realizing the situation at once. . .secured a well armed posse of over a score of men to prevent any attempt o the part of the crowd to lynch the prisoner. . .[he] procured a light wagon in which the prisoner was placed, guarded by himself, Virgil Earp and Deputy Sheriff Behan, assisted by a strong posse well armed." It ends by saying, "Marshal Sippy's sound judgement prevented any such outbreak as would have been the certain result, and cool as an iceburg he held the crowd in check."

Ah, Ben Sippy is the brave one and he's not even mentioned in any of the versions we just painstakingly went through. In addition, we have Johnny Behan—yes, THAT Johnny Behan— helping the cause and he's not in any of the above versions becuase there is no way Wyatt would give him credit for anything. So that taints all three versions. What we have here is obvious exaggeration to the point of ridiculousness. And they all did it for one reason: the money. Ironic that Burns and Lake actually made good money but Wyatt Earp never made a dime. Yet, all three versions came from Wyatt. What was the need to lie like this? To be vindicated? To be famous? To be rich?

"What seems a lie is a ramshackle need, waiting to be born."
—Ray Bradbury