July 13, 2015
Researching the era when Wyatt Earp was in Hollywood and what was happening around him. Here's something he had to have seen numerous times: 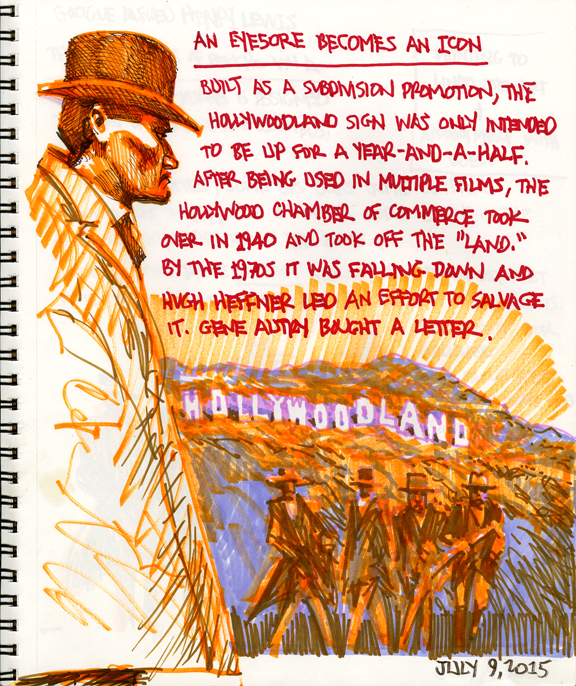 Daily Whip Out: "When An Eyesore Becomes An Icon"

The Hollywood Sign History
The original Hollywood sign was erected in 1923 for $21,000 and spelled out Hollywoodland as an advertisement for a local real estate development. The wood, 45-foot-tall letters were made of wood and sheet metal and were only intended to be up for a year and a half, but with the rise of American cinema, the cheesy sign took on a new significance. In the 1940s a drunk driver (actually the sign’s caretaker) ran off the road and destroyed the H and caretaker's 1928 For Model A. In 1949 the  Hollywood chamber of commerce took over the sign and took off the “land.” But by the 1970s the sign was in bad shape with several letters falling down completely. In 1978 a public campaign led by Hugh Heffner, set out to restore the landmark. Nine donors gave $27,000-and-change each to sponsor replacement letters. Gene Autry bought one of the letters as did Alice Cooper who bought an O for Groucho Marx, while joking he would also donate an “O” from his last name.

Interesting that almost the exact same thing happened in Paris, France over the Eiffel Tower. Public outrage over the very idea of such a proposed monstrosity being built in the historic city of lights was unthinkable to most Parisians. A compromise was finally reached and accepted that as soon as the fair was over, that eyesore had to come down. Last time I was there (2010) they still hadn't taken it down.

Same thing with those ten Cadillacs half-buried nose-deep in the ground outside Amarillo, Texas. It's known as Cadillac Ranch today and the hippies who were part of the Ant Farm collective who thought it up had to fight public opinion for the longest time. It too, was deemed an eyesore, and the towns' fathers screamed to the heavens to take it down once the sixties were over.

Funny how certain eyesores become icons. Wonder what the lesson is?

"Don't be kind of bold. Be bold."
—William Zinsser