Was Wyatt Earp A Two-Gun Man?

July 11, 205
I'm on page 248 of the Flood manuscript—100 to go. It's hard work. Sometimes I have to read a page several times to try and figure out what he's even talking about. And, of course, the real trick is trying to figure out how much is Wyatt and how much is Flood padding out the text by poaching from the pulps, and other sources. Here's an intriguing anectdote on page 45, in the chapter "A New Officer":

"Now Earp, you're a full fledged officer; all you need is a brace of guns; go down to the store and tell them I sent you."

"Guns, Earp!" "Two guns!" thundered the Mayor [of Wichita] only minutes later. "Go back and get another; my men need two guns." "They need them and you will too." The [cut off in the gutter of page] wanted him to have it, and he wanted it more than the mayor or anyone else knew."

End of Flood. Later in Tombstone, Flood has Morgan wearing two guns as well. Which brings up a good question: was Wyatt Earp a two-gun man? 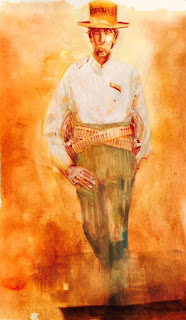 Daily Whip Out: "A Two-Gun Man"


We know, in the thirties and forties, the movie portrayals featured two-guns on Wyatt, although I believe Henry Fonda portrayed him as only carrying one gun in "My Darling Clementine." And, obviously Hugh O'Brian wore two guns portraying Earp in "The Life & Legend of Wyatt Earp." Later portrayals revert to Wyatt only wearing one gun: Kevin Costner in "Wyatt Earp" and Kurt Russell in "Tombstone," and I believe James Garner as well in "Hour of the Gun". Which is correct? And why the change? Why did the early movies have Earp wearing two-guns and then the scaling back to only one? I sent this inquiry to one of the foremost experts on Wyatt Earp and got this response:


What follows is my OPINION. Or, maybe, reasoned conclusion. It is not something I can base on fact.

From reading the Flood, I suspect that John Flood interviewed Earp, got a few facts and anecdotes, then filled in a whole lot of blanks. He used Bechdolt; he used stories from pulp Westerns and Dime Novels; he used whatever he found. Such stories as the two-gun story are so weird that it is hard to imagine it being real.

In the Flood, Bob Paul changes seats with the driver before the Benson stage robbery. In Lake, there is no change. In the Lake notes, there is a point where Lake writes with emphasis that the driver did not change seats. It appears that came from an interview with Wyatt.

So I am not comfortable that every word in the Flood came from Wyatt. We know how Lake described him as being taciturn and not good at elaborating. We know that in Burns's notes, Wyatt's description of the Johnny-Behind-The-Deuce incident is very understated.

I suspect that Flood, perhaps exasperated by Earp's blandness, tried to goose up the story by adding phony anecdotes from other sources.

As to the two-gun, one-gun issue, I suspect that more recent writers have looked at pictures of the old-time gun handlers. If I am not mistaken, most of the pictures show them carrying one gun. Those guns were pretty heavy, and it would be hard to keep your belt up with two guns. When I put on my grandfather's gunbelt, I can only imagine how hard it would be to constantly walk around with two guns instead of one. He was an officer in the 1920s and '30s, and he wore one gun.

I should probably dig out some of the True West Best Picture issues to see what they show, but that is my guess.
—Casey Tefertiller

Of course, Wild Bill Hickok is the model for the two-gun law man and I suspect Wyatt emulated him, perhaps after the fact (he wanted to come off like Hickok in the manuscript so he perhaps added the story to amp up his firepower). There are numerous photos of Hickok with two pistols and he was the prototype of the cowtown lawman and he was doing his work just down the road from Wichita and Dodge, so it's not hard for me to imagine that all the cowtowns wanted a marshal who carried two guns. Remember, Hickok's two-gun visage was illustrated in the pulps of that day so I imagine everyone in the Kansas cowtowns, at least, wanted to be like Wild Bill in the 1870s. That seems accurate, to me.

My guess is that photo scholarship in the mid-twentieth century, did erode the two-gun image, and that the two-gun celluloid marshal started to seem ostentatious and exaggerated, so the later portrayals reverted to the more modest one-gun Wyatt Earp. What's especially interesting to me is that we are all picking and choosing which portions of the Flood manuscript (and Burns and Lake) to believe and which to discard. If we don't like something, we blame Flood and Burns and Lake. If we concur, we say smugly, "Well, at least he got that right. He must have listened to Wyatt."

The anecdotes in the Flood manuscript are so meager and vague I have a hard time believing Flood even looked up anything. When Wyatt is in the posse chasing the Benson stage robbers he says they came through the "Ragoon" mountains. There are no Ragoon mountains in Arizona. Perhaps the Dragoon mountains or the Rincon mountains? So, either Wyatt's memory is terrible, or, Flood's research is shabby (choose your poison).

When Flood writes about Morgan getting the drop on Pony Deal and other Cowboys he says it took place in "Safford," between "Bisbee and Charleston on the San Pedro River." Excuse me, but Safford is way north of both bergs, on the Gila River, not the San Pedro. Was he thinking of Hereford, perhaps, which is on the San Pedro between Bisbee and Charleston? And, it's here he mentions Morgan pulling two pistols. I don't know, but It has a ring of truth in it, to me, he said, throwing out the bad geography and retaining the one "fact" he wants to believe.

As I read the manuscript I'm trying to picture the two men sitting at the kitchen table and Flood trying to draw Wyatt out (and Sadie yelling at the two of them at every turn). Thanks to her, Flood has Wyatt and Virgil coming into Tombstone—just the two of them as bachelors on horseback. We know why she insisted on that falsehood, because they actually came in wagons with their wives. And Sadie could not allow that.

Anyway, I have to believe the bare bones (and they are bare!) of the stories are Wyatt's. Flood respected him too much to make up stuff out of whole cloth. That's my OPINION.

And, of course, Flood's idea of helping is to lard up the narrative with ridiculous expository bullshit.

Anyway, fun to speculate on, and although it is all absurd and maddening to even try and find the truth about Wyatt Earp, still we try to get it right. And, besides, some of the quotes are hilarious in their awfulness:

"We are not afraid and we're fully capable of handling the situation; we're sanguine that we'll win."
—Wyatt Earp, as quoted by John Flood in the run up to the O.K. Corral fight
Posted by Bob Boze Bell at 7:13 AM