July 7, 2015
Last week (June 28) I taped a segment of a new BBC show shooting in 3-D. The director walked me into the O.K. Corral to see about where to shoot the segment, but he didn't like the mannequins, or the space (it's fenced off) on the actual spot, so I suggested we start at Hafford's Corner and walk the actual route the Earps and Holliday took to the fight. Here I am with the host Tony as we began our journey up Fourth Street from Hafford's Corner. 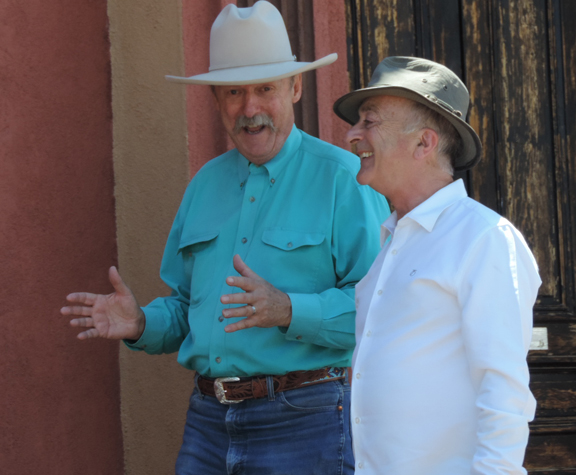 Telling Tony the story of The Walkdown in Tombstone

Sir Tony Robinson is a big fan of the rock band Genesis and provided sleeve notes for the reissue of the album The Lamb Lies Down on Broadway as part of the Genesis 1970–1975 box set.
It came as quite a shock to many when Robinson was knighted in the 2013 Birthday Honours for public and political service. He and I are the same age, 68, so we compared notes: when I said I was the class of '65 Tony said, "we don't do it that way in England. I am the class of '57. We count it from your first year."

Evidently, in Britain, they count their class from middle school (He said he was 11 when he started), because so many go off to trade school, or other education institutions and the end may be staggered? That is my take on it. May be wrong but they DO NOT count their class from the graduation year. So that was educational, for me.

Tony also has the opinion that the English Invasion fizzled when The Byrds and The Band came on the scene. In his mind, the Americans won at that point, which is kind of crazy to me since the Stones are still probably the biggest band in the world, with U2 right behind. So, I'm not sure what he means by that, this crazy Brit from the class of '57.

The Brit crew shot the segment like a movie and we did the Walkdown about seven times, with various camera angles. By the way, Tony does about 30 travel shows a year. He was a smooth pro and lobbed me juicy questions. A very likeable bloke. 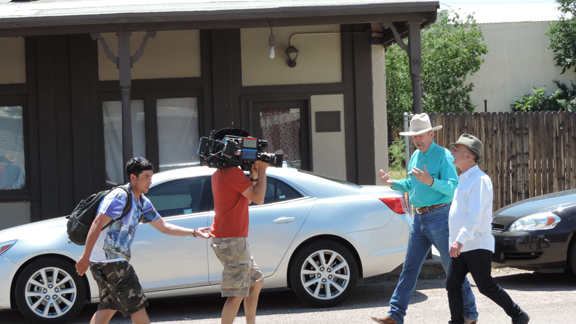 Tony and I pretending not to see the camera right in front of us
as we angle into the street and make the turn onto Fremont Street.

I told the story of the Earps and Holliday making the turn and going into the center of the street, where they spread out and walked abreast for a ways. This is the classic iconic moment with four men walking side by side to confront their enemies. 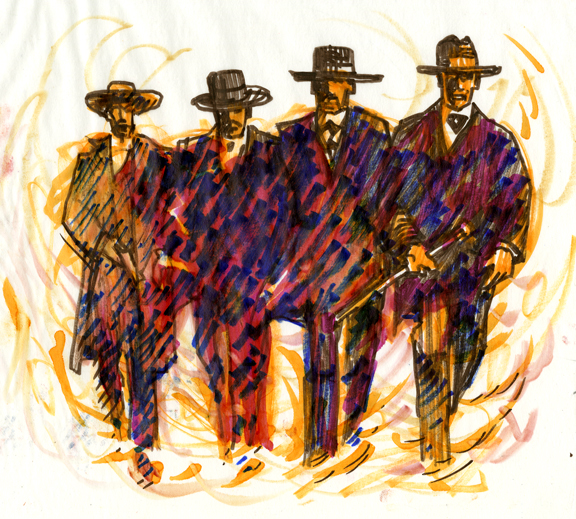 Daily Whip Out: "The Walkdown"

As the quartet passed the rear entrance of the O.K. Corral, they returned to the sidewalk and when they passed the front door of Bauer's Meat Market, a woman inside overheard one of the party say, "Let them have it!" 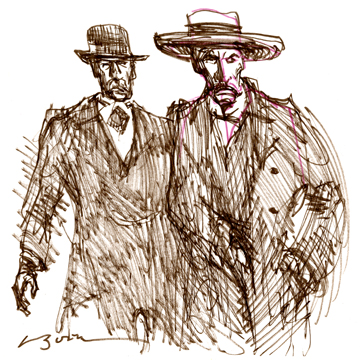 Historians believe Morgan Earp and Doc Holliday were in the rear and it was Morgan who said "Let them have it." He did.

Working on sketches for the Walkdown. It's the legs that are difficult. The subtle lifting of the leg and the swinging of the arms gives the walk its intention. 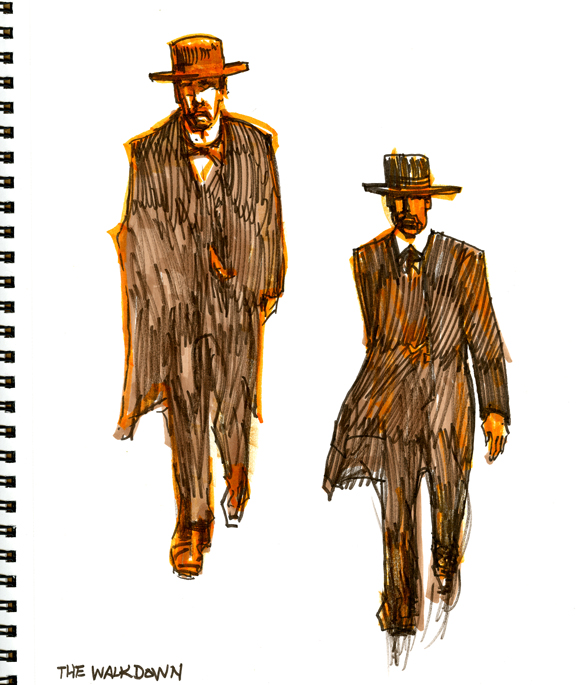 Give the leg too much kick and it looks like a gimp leg (above, left), make the front foot too big and it looks like a club foot. Also, a lowered head can portray aggression, or, as it appears here (at left), a crotchety old man with stooped shoulders. Give the hand too much swing, at right, and it looks like he's picking his ass. What I'm saying is, it's hard to draw four men, walking side by side and give it the subtle sway and swing and the intent and the anatomical accuracy it needs.

"By trying to grab it all, we retain nothing."
—Old Vaquero Saying