July 25, 2015
Thanks to Andy Sansom, I got to revisit three Kingman legends. 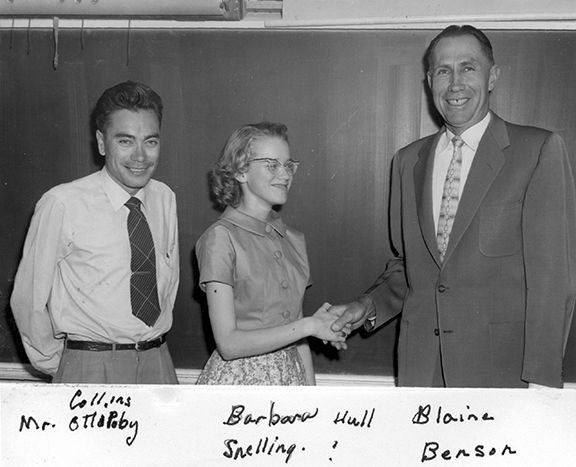 
I had Mr. Ottipoby in Eighth Grade and he was a strict disciplinarian. He gave some mean swats. One day Box-Lip-Darrell (not his real name) played a trick on Denny Stahl  (his real name but probably misspelled) and, well, it's one of my typically long Kingman stories, but suffice to say, one of them got it good.

In eighth grade we had three teachers, Collins Ottipoby (he had In-din blood), Paul Lamasney and Miss Huegenin (sic). She was just starting out and had zero discipline in her room. I remember we changed rooms and went to the teachers, and Lamasney's was on the west end, Huegenin's was in the middle and then Ottipoby's class on the east end. Ottipoby was my home room, but we went to the other classes for history and other subjects.

Anyway, we would be good in Ottipoby's class and then be completely rowdy in her class. Kids like Denny Stahl (sic) would literally flaunt her authority and throw stuff. But the worst kid was John Pemberton who came into class one day with a heart taped on his shirt and told everybody he had "A heart-on." He also allegedly hung a kotex belt on her classroom door and she was very upset about it. She cried a couple times, and we were horrible and should have been ashamed of ourselves, but, of course, we were your typical stupid and arrogent eighth graders.

And classmate Fred Grigg, who was bused in from Valentine, also flaunted authority in Lamasney's class, sitting with his legs up on his desk and when Lamasney told him to put them down, Fred just laughed and said something smart and Mr. Lamasney pretended he didn't hear it. However, I couldn't get away with that crap. One day Mr. Lamasney remarked how much he hated Billy the Kid (Mr. L was from Las Vegas, New Mexico) and that the outlaw shot everyone in the back. I smarted off and said, "he didn't shoot them in the back, they just didn't turn around fast enough" Got a big laugh, but i also got two swats. Really, really hurt, but I wore those swats with some pride. People forget that there is a good side to child abuse.

But NOBODY acted out in Ottipoby's class. We knew he would tolerate no lip. Collins had this routine in the afternoon where we could study quietly and one or two kids at a time could go to the restroom. We would go by rows and we'd go out the door and down to the restroom at the far west end of the building. When one person would come back another would go. Well, one day Box-Lip-Darrel went down to the restroom and while he was out, Mr. Ottipoby left to go to the office and told us to behave. Well, as soon as he was gone, Denny Stahl left to go to the bathroom. Some time went by and I heard running steps outside the classroom. The door opened and it was Denny Stahl, who came in quickly, closed the door and held the door nob with two hands and leaned back to make double sure it couldn't be opened. Then we heard steps approaching the door. Someone outside turned the nob but the door wouldn't open because Denny was holding it closed with both hands and giggling demonically.

There was another tug on the door, and this time the door opened more than a crack, but Denny pulled it back, and continued laughing at the nifty little trick he was pulling on Box-Lip-Darrel. Finally, there was a loud bang and the door swung violently open and Denny got a wild-eyed look on his face as two long arms came in and grabbed him by the lapels and jerked him out beyond our field of vision. The door slammed shut and we all heard Denny's pitiful apologies fade down the corridor.

Thirty seconds later, Box-Lip-Darrel returned to the room, came in quietly and all of us were staring at him in disbelief and, oblivious to what had just happened, Box-Lip shrugged and said, "What?"

Denny and Mr. Ottipoby came back from the bathroom about fifteen minutes later and Denny was shaking (this was before water-boarding but he looked like he had been through some major rendition). I seem to remember later asking Denny what Collins did to him, and him saying something about soaping his hands and Ottipody slamming him around the bathroom, but I may be wrong about that. Hell, I may be wrong about the whole damn incident. I met Fred Grigg at Charlie Waters' memorial service late last year and he told me Mr. Ottipoby is still alive and lives on the Laguna Reservation in New Mexico. I'd love to drop in on him next month when I'm over there for the Billy the Kid pageant (I'll be giving a talk on how Billy the Kid shot everybody in the back) and I just may do that.